Since October, more than 5,000 central American migrants have set out on the long, arduous journey of thousands of kilometers, towards the US. 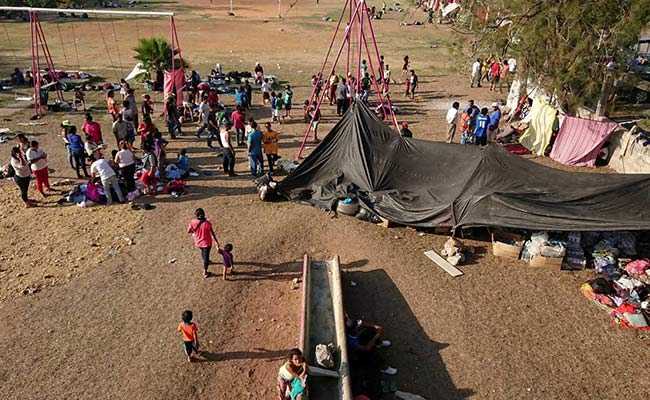 Migrants prepare to form a new caravan from El Salvador for the promised land of the US.

As a group of migrants prepare to form a new caravan to set out from El Salvador for the promised land of the United States, eager participants exchange messages over social media.

How will they cross the border? What should they bring? Mothers and their children, youngsters fleeing violent gangs, men hoping to find a way to feed their families: the caravan attracts all sorts.

As soon as one caravan leaves, plans for the next one swamp social media. Hundreds of interested parties fire off questions, engage in discussions or share their hopes and fears.

"My aim is to reach the United States. In the caravan, no one will be able to touch me," said one rasping voice in an audio post on a chat for the last caravan to leave El Salvador.

The day before it departed, migrants spent the night on the El Salvador del Mundo square in the capital San Salvador, a place dominated by a huge column upon which Jesus stands atop a globe.

Since October, more than 5,000 central American migrants have set out on the long, arduous journey of thousands of kilometers, either by foot, bus or hitch-hiking northwards towards the US.

"It's safer in the caravan"

"I found out about the caravan on Facebook. Someone posted a link in a WhatsApp chat," a 38-year-old widow with children aged 11 and 13, told a news agency AFP.

"People exchange information, there are no leaders."

Her face shaded by a baseball cap, she refuses to give her name for fear that gangs will harass her. They might one day have their eyes on her eldest, a pretty brunette with long, curly hair.

These gangs strike fear across not just El Salvador but the whole central American region, whether by murder, forcing boys to join them or raping girls.

The widow quit her $6-a-day job making corn tortillas to join the caravan. She has no other way of trying to reach the US.

"We poor people, we don't have the $8,000 that a coyote demands," she says, referring to people smugglers.

"It's also safer in the caravan," she adds.

Another mother was forced to abandon her house under threats from gangsters who had already kidnapped her husband.

The 39-year-old said the caravan offered an opportunity to give her 12- and 14-year-old sons "a better future."

On the El Salvador del Mundo square, families gathered with children in tow to witness the official decorating of the city's Christmas tree amid fireworks and singing.

Few people took any interest in the migrants, easily recognizable among the throng by their meagre backpacks.

"Lies and lack of solidarity"

Following the lead of 2,000 migrants who left Honduras on October 13, an initial group of 400 Salvadorans set off on October 28.

Three days later, their numbers had swelled four-fold, some alerted to the possibility through Facebook pages such as "El Salvador emigrates for a better future," which has been liked more than 4,000 times.

By November 18, though, there were barely 200 left among them as the rest had given up walking and stumped up the $5 necessary to take a bus to Guatemala.

While social media plays an important role in mobilizing and organizing would-be migrants, it can also sow the seeds of doubt or discontent amongst them.

Unverifiable tales of migrant hostility encountered in the countries they pass through are quick to spread, particularly by WhatsApp.

"They're all crammed at the Mexican border and no one's giving them anything," wrote one anonymous person from a Mexican cellphone.

Another claims that you have to pay "$50 to get a child through" the border.

"They said those who organize the caravan asked for money... that there wasn't the solidarity advertised on social media to progress together... that all the comments on social media were lies," she said.

A 43-year-old mother and her sons aged 16 and 20 told news agency AFP they were arrested and detained in Mexico.

She is another who withheld her name out of fear of the MS-13 criminal gang that originated in California but has since spread its tentacles throughout Central America.

It's a group that US President Donald Trump frequently claims has infiltrated the migrant caravans as he pushes a tough stance on border security.

MS-13 made her nephew disappear and then harassed her after she went looking for him.

It also tried to recruit her youngest son when he was only 11.

Getting away from the gangs is proving tough. After leaving home, she received death threats when exiled in Guatemala, forcing her to move on.

Even at the Mexican detention center, she came across gang members.

"We landed in something even more dangerous, worse," she said

After her travails, she opted to be sent home and now stays at Migrant House, an establishment run by Catholic missionaries in San Salvador.

She plans to relocate to one of the few regions of the country not beleaguered by gangs "for my sons' safety, no matter how far away or isolated it is."

One thing she's sure she'll never do again, though, is try to emigrate.

Despite such difficulties, another group is active on social media, preparing to head out from El Salvador on January 2.

Within minutes, 200 people have connected to the group and the messages multiply.

Without revealing his identity, #StarLord announces himself as the group's administrator. He decides who gets to stay in the group, deletes messages and dishes out advice.

"Fleeing hunger and blood"
On average 300 to 400 people leave El Salvador every day. The caravans have proved hugely tempting, in particular for those who cannot afford to pay the sums demanded by "coyotes."

Authorities have even snared people smugglers who managed to infiltrate caravans.

The presidents of Guatemala, Jimmy Morales, and Honduras, Juan Orlando Hernandez, have hit out at the caravans, claiming they've been manipulated politically in order to "violate borders."

Nicaragua's Daniel Ortega and Nicolas Maduro of Venezuela have been accused of encouraging caravans to deflect attention from the crises in their countries.

For Benjamin Cuellar, a Salvadoran human rights expert, those accusations have "no objective foundation."

He says attention should be turned instead to solving the problems that motivate people to migrate.

"People live in hell. They're fleeing... hunger and blood."