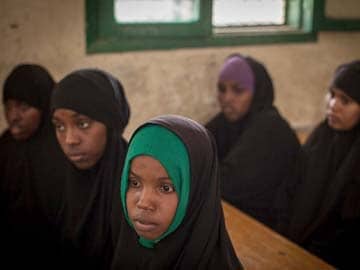 Women take part in a discussion on female genital mutilation at an after school program for children's rights at Sheikh Nuur primary school in Hargeysa, Somalia on February 19, 2014.

Hargeysa, Somalia: Malko Jama, a recently widowed Somali mother of eight, still remembers undergoing genital mutilation three decades ago as vividly as if it were yesterday.

"I was nine. A woman came to the house. They held me down and held my legs apart and she cut me with a razor and stitched me back up with acacia thorns," Jama, 40, explains as she sits on the concrete floor of a neighbour's house in Hargeisa.

"Now they have a more modern way for stitching girls back up but at the time they used thorns like pins," she recounted.

Jama is one of countless women in the Horn of Africa region to have undergone female genital mutilation, a ritual and surgical procedure carried out without anaesthetic and designed to keep women pure.

"When it was finished they took a big sheet and a cord and they bound my thighs together... so that I had to stay there with my legs together. They brought me small pieces of bread but refused to allow me water or tea. They said the body had to dry out."

In too much pain to move and tied up, for the first four days Jama had to urinate where she was sitting.

"After seven days they removed the sheet and the cutter came to inspect me. She said I was completely closed up," recalled Jama, who is now also a grandmother of three.

"I later realised how lucky I had been because girls considered not to have closed up completely get some more flesh cut out and they get sewn up again," she said, her face framed in a patterned veil.

"As I grew up my periods weren't coming properly and I had constant abdominal pain and back pain. When I used to tell my mother she would say: 'Take these tablets. It's normal. When you get married everything will be ok,'."

Jama said she was 15 when she got married and 17 when she gave birth to her first child, even though sex did not involve full penetration - as her vagina was so tightly stitched up.

"When they took me to my husband's house the first thing my mother-in-law did was to open my legs and inspect me. My husband's family wanted to start boiling scissors and cut me open because I was his bride," she said.

Her own family argued that another operation could harm the baby, so the two families eventually agreed she should not be opened up whilst still pregnant.

"After two months of trying to penetrate me without succeeding my husband went into a depression," Jama said of her marriage.

She described her own lack of desire matter-of-factly: "Even in the first year of your marriage you're not really interested in sex. There is a sensation but nothing very much," she shrugged.

Promoted
Listen to the latest songs, only on JioSaavn.com
Childbirth brought additional complications and entailed three cuts - the undoing of the existing stitches and a slit on either side of the vagina, again without any painkillers.

"The first child is the most painful," Jama said, adding she chose not to have her daughters go through the same ordeal - although even 30 years on in Somali removal of the clitoris is still considered the norm.