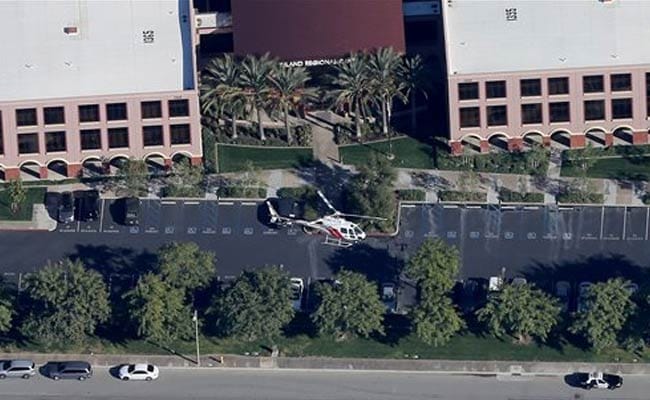 A police heicopter hovers around the Inland Regional Center in San Bernardino, scene of a mass shooting on Wednesday, December 2, 2015. (AP Photo)

LOS ANGELES: The office building in San Bernardino, California, where 14 people were massacred last month by a married couple inspired by Islamist militants, reopened on Monday.

Security would be heightened for the facility, which was closed in the aftermath of the December 2 shooting, said Inland Regional Center Executive Director Lavinia Johnson.

The property would remain fenced off, and guards at each entrance would continue to monitor security, Johnson said.

Syed Rizwan Farook and his wife, Tashfeen Malik, stormed into a holiday party attended by his co-workers from a San Bernardino County social services agency and opened fire on December 2, killing 14 people and wounding 22 others.

Authorities have said the couple were inspired by Islamist militancy, and called it the deadliest such attack on US soil since September 11, 2001.

The couple attacked the California holiday party just weeks after gunmen and suicide bombers linked to the Islamic State militant group killed 130 people in a series of coordinated attacks in Paris.

The San Bernardino attackers had not targeted any of the centre's roughly 600 staff members, but rather employees of the San Bernardino County Department of Public Health, Johnson told reporters on Monday.

"We want to send to them our condolences today," she said.

Counsellors would be on hand to offer support to workers, Johnson said.

None of the people with developmental disabilities that the centre serves, numbering about 31,000, would visit this week, the Los Angeles Times reported.

San Bernardino County officials said many county offices would close at noon on Monday to allow employees to attend a private memorial for the victims of the December attack.

A former neighbour of Farook's, who prosecutors say supplied assault rifles to the couple, was indicted last week on charges of conspiring to provide material support to terrorists.