In Masks And Gloves, Singaporeans Vote Under COVID-19 Cloud

In power since independence in 1965, the ruling People's Action Party is expected to carry Prime Minister Lee Hsien Loong to another comfortable, and probably final victory. 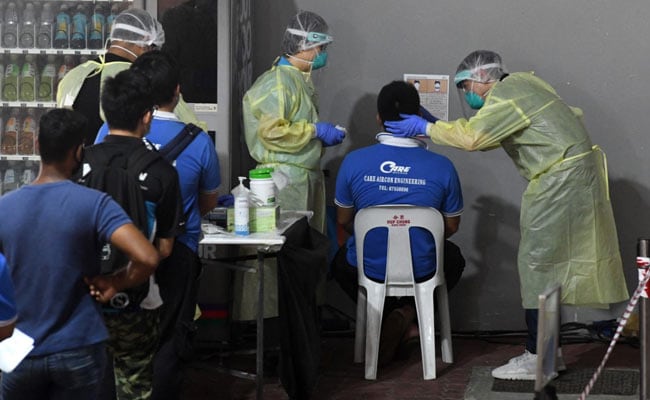 Singaporeans wearing masks and gloves will cast their ballot on Friday.

Singaporeans wearing masks and gloves will cast their ballot on Friday under the cloud of the COVID-19 pandemic that is pushing the city-state's economy towards its deepest recession and has made concerns over jobs the focus of the election.

In power since independence in 1965, the ruling People's Action Party is expected to carry Prime Minister Lee Hsien Loong to another comfortable, and probably final victory.

The son of Lee Kuan Yew, Singapore's founding leader, Lee has held the premiership since 2004, but aged 68 he has already flagged his intention to step aside in coming years.

Seen as a measure of approval for both the government's response to the coronavirus crisis and the next generation of leaders, the poll results will be closely watched as even small shifts in the PAP's popularity can lead to major policy changes.

When concerns around immigration and jobs flared in 2011, the PAP polled a record-low 60% of the vote and tightened international hiring rules to address voters' sensitivities.

And as the Asian trade and banking hub emerges from lockdown to face its deepest recession, these concerns are once again to the fore.

Despite the economic turbulence, Singapore remains a small, wealthy rock of stability, thriving as a financial, trade and transport hub for Southeast Asia.

There are just 2.65 million voters, and election organisers are counting on a fast, regimented and hygienic vote to minimise risks of coronavirus infections.

Since easing a lockdown last month, the number of new daily cases crept back into double figures last week, excluding the migrant workers living in dormitories where infection rates have been far higher.

Wearing masks is compulsory in public. And voters are expected to spend no more than five minutes in a polling station, where they will self-scan identity cards, sanitise their hands and pull on disposable gloves before receiving a ballot paper.

Sample counts are expected soon after the close of polls at 8 p.m. (1200 GMT) with final results due in the early hours of Saturday.

Singapore is not the first country in Asia to hold elections during the pandemic - South Korea held parliamentary elections in April - but its mandatory ballot comes under strict conditions.

Citizens have each been given a recommended voting window.

COVID-19 patients and those under quarantine cannot vote, but a mobile polling team will bring the ballot box to the rooms of Singaporeans who have recently returned from overseas and are being isolated at hotels.

Those who are unwell, such as with cough or fever, can vote during a special hour where election officials will don full protective gear and surfaces will be cleaned after every ballot cast.

The city-state has one of the lowest COVID-19 fatality rates in the world, and initially earned widespread praise for its COVID-19 containment efforts.

But subsequent mass outbreaks in cramped migrant worker dormitories stained that early success, and persuaded the government to keep schools and businesses closed for longer.

Lawrence Wong, a PAP lawmaker who fronted the city-state's virus response, said the government had mounted a "huge effort" to care for migrant workers, and brought down infection rates outside dormitories and protected Singaporeans.

"Singaporeans will have to judge," Wong said on Wednesday.