Should you be snuggling with your cellphone? 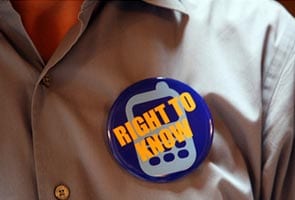 San Francisco: WARNING: Holding a cellphone against your ear may be hazardous to your health. So may stuffing it in a pocket against your body.

San Francisco officials voted to require retailers to display how much radiation each cellphone emits. A supporter of the rule wore a button at City Hall.

I'm paraphrasing here. But the legal departments of cellphone manufacturers slip a warning about holding the phone against your head or body into the fine print of the little slip that you toss aside when unpacking your phone.

Apple, for example, doesn't want iPhones to come closer than 5/8 of an inch; Research In Motion, BlackBerry's manufacturer, is still more cautious: keep a distance of about an inch.

The warnings may be missed by an awful lot of customers. The United States has 292 million wireless numbers in use, approaching one for every adult and child, according to C.T.I.A.-The Wireless Association, the cellphone industry's primary trade group.

It says that as of June, about a quarter of domestic households were wireless-only.

If health issues arise from ordinary use of this hardware, it would affect not just many customers but also a huge industry. Our voice calls -- we chat on our cellphones 2.26 trillion minutes annually, according to the C.T.I.A. -- generate $109 billion for the wireless carriers.

The cellphone instructions-cum-warnings were brought to my attention by Devra Davis, an epidemiologist who has worked for the University of Pittsburgh and has published a book about cellphone radiation, "Disconnect." I had assumed that radiation specialists had long ago established that worries about low-energy radiation were unfounded.

Her book, however, surveys the scientific investigations and concludes that the question is not yet settled.

Brain cancer is a concern that Ms. Davis takes up. Over all, there has not been a general increase in its incidence since cellphones arrived.

But the average masks an increase in brain cancer in the 20-to-29 age group and a drop for the older population.

"Most cancers have multiple causes," she says, but she points to laboratory research that suggests mechanisms by which low-energy radiation could damage cells in ways that could possibly lead to cancer.

Children are more vulnerable to radiation than adults, Ms. Davis and other scientists point out.

Radiation that penetrates only two inches into the brain of an adult will reach much deeper into the brains of children because their skulls are thinner and their brains contain more absorptive fluid.

No field studies have been completed to date on cellphone radiation and children, she says.

Henry Lai, a research professor in the bioengineering department at the University of Washington, began laboratory radiation studies in 1980 and found that rats exposed to radiofrequency radiation had damaged brain DNA.

He maintains a database that holds 400 scientific papers on possible biological effects of radiation from wireless communication.

The unit of measurement for radiofrequency exposure is called the specific absorption rate, or SAR. The Federal Communications Commission mandates that the SAR produced by phones be no more than 1.6 watts per kilogram.

One study listed by Mr. Lai found effects like loss of memory in rats exposed to SAR values in the range of 0.0006 to 0.06 watts per kilogram. "I did not expect to see effects at low levels," he said.

The city of San Francisco passed an ordinance this year that requires cellphone retailers to post SARs prominently. This angered the C.T.I.A., which announced that it would no longer schedule trade shows in the city.

The association maintains that all F.C.C.-approved phones are perfectly safe. John Walls, the association's vice president for public affairs, said: "What science tells us is, 'If the sign on the highway says safe clearance is 12 feet,' it doesn't matter if your vehicle is 4 feet, 6 feet or 10 feet tall; you're going to pass through safely.

The same theory applies to SAR values and wireless devices."

The association has set up a separate Web site, cellphonehealthfacts.com.

Four attractive young people are seen on the home page, each with a cellphone pressed against the ear -- and all four are beaming as they listen.

By this visual evidence, cellphone use seems to be correlated with elation, not cancer.

The largest study of cellphone use and brain cancer has been the Interphone International Case-Control Study, in which researchers in 13 developed countries (but not the United States) participated.

It interviewed brain cancer patients, 30 to 59 years old, from 2000 to 2004, then cobbled together a control group of people who had not regularly used a cellphone.

The study concluded that using a cellphone seemed to decrease the risk of brain tumors, which the authors acknowledged was "implausible" and a product of the study's methodological shortcomings.

The authors included some disturbing data in an appendix available only online. These showed that subjects who used a cellphone 10 or more years doubled the risk of developing brain gliomas, a type of tumor.

The 737 minutes that we talk on cellphones monthly, on average, according to the C.T.I.A., makes today's typical user indistinguishable from the heavy user of 10 years ago.

Ms. Davis recommends keeping a phone out of close proximity to the head or body, by using wired headsets or the phone's speaker.

Children should text rather than call, she said, and pregnant women should keep phones away from the abdomen.

The F.C.C. concurs about the best way to avoid exposure. It is not by choosing a phone with a marginally lower SAR, it says, but rather by holding the cellphone "away from the head or body."

It's advice that I find hard to put into practice myself. The comforting sight of everyone around me with phones pressed against their ears, just like me, makes the risk seem abstract.

But Ms. Davis, citing unsettling findings from research in Israel, France, Sweden and Finland, said, "I do think I'm looking at an epidemic in slow motion."