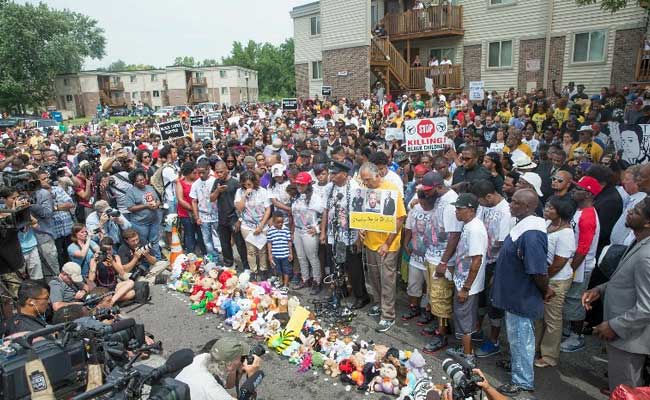 People attend a memorial service to mark the anniversary of Michael Brown's death on August 9, 2015 in Ferguson, Missouri. (AFP Photo)

Ferguson, Missouri: Gunfire erupted on Sunday night in Ferguson, Missouri, as a day of peaceful rallies to mark one year since an unarmed black teen was shot and killed by a white police officer gave way to a confrontation between police and protesters, a Reuters witness said.

Anniversary commemorations for Michael Brown had begun with a quiet march through the St. Louis suburb following a moment of silence for the 18-year-old youth, who's slaying on August 9, 2014, ignited months of demonstrations and a national debate on race and justice.

The scene changed dramatically after dark with a crowd of dozens of protesters blocking traffic and smashing store windows along West Florissant Avenue, which bore the brunt of last summer's rioting, chanting "Shut it down."

Shots rang out and additional police clad in riot gear roared into the area in heavily armored vehicles, the witness said.

A body could be seen on West Florissant Avenue and a young woman screamed that her brother had been shot. Multiple store windows had been smashed out and police stood atop vehicles surveying the scene.
© Thomson Reuters 2015