She Thought The Weird Sensation Was A Stray Eyelash. It Was Eye Worms.

The half-inch long eye worm - once only found in cattle - was one of several that infected Abby Beckley's eye in the summer of 2016. The worm species, Thelazia gulosa, was previously only found in cattle

Abby Beckley thought her left eye was irritated because of a stray eyelash. She rubbed her eye, flushed it with water, but when the discomfort remained, she peered into the mirror. She thought she saw a piece of clear fuzz. She pinched it with her fingers and pulled it out.

It was a worm. About half-inch long, translucent and threadlike. "It was alive and squiggling around," she recalled.

Beckley remained calm. The 26-year-old was a deckhand on a commercial salmon fishing boat in Alaska. Maybe a common but harmless salmon worm had fallen into her eye. At a local urgent care clinic, the clinicians did not know what to tell her, but they pulled out two more worms. An ophthalmologist pulled out another two.

Beckley became increasingly alarmed. She was not in pain, but her eye was red and inflamed. No one knew how to advise her, and she imagined the worst. Could she lose her vision? Could the worms crawl into her brain? Paralyze her face?

Luckily, her boyfriend's parents, both doctors, got her an appointment with an infectious disease specialist in Portland, Ore. They also reassured her the worms probably did not have the capacity to reproduce or crawl into her brain.

In the end, it was a team of scientists at the Centers for Disease Control and Prevention that solved Beckley's case, which took place in August 2016. Scientists at CDC's special lab that diagnoses parasitic diseases figured out she had been infected by a species of eye worm that had never before been found in a human. By the time her ordeal was over, 14 worms had been pulled from her eye.

Medical parasitologist Richard Bradbury identified the species by searching the medical literature and eventually finding an obscure journal written in German that was published in 1928. The case study about Beckley's ordeal was published Monday in the American Journal of Tropical Medicine and Hygiene.

"We never expected to see this particular species in a human," Bradbury said. Until now, this type of worm, Thelazia gulosa, had only been found in cattle. 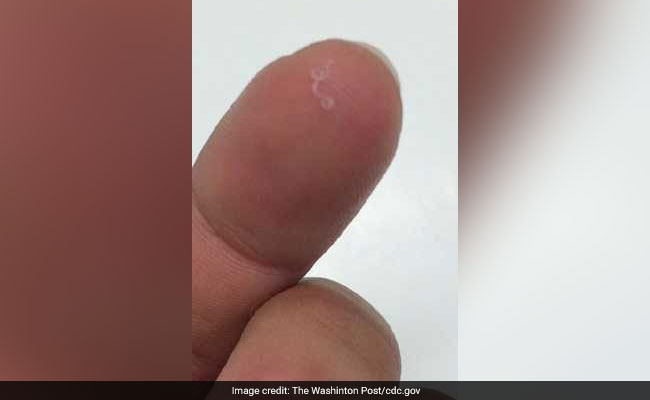 14 worms were pulled out of Abby Beckley's eye

This half-inch long eye worm - once only found in cattle - was one of several that infected Abby Beckley's eye in the summer of 2016. (Courtesy of Abby Beckley)[/caption]

Eye worms infect a variety of animals, but human infections are rare. The worms are transmitted to eyes by flies. The flies ingest the worm larvae, then land on an animal's eyes, where the flies feed on tears and other secretions. During this process, the flies deposit the worm larvae into the eye, where they grow into adult worms.

Eye worm infections typically occur in children and the elderly, experts said. Human infections have been reported in parts of Asia as well as in Russia, Italy, and France. The worms cause inflammation but symptoms go away if they are removed. In more serious cases, they can cause scarring of the cornea and even blindness. There have only been 10 other cases of eye worm infections in the United States, but they have not involved the cattle eye worm that infected Beckley.

Photos of Beckley's inflamed eye and one of her eye worms are now part of the official CDC Thelazia page. She made medical history because of bad luck.

In the weeks before her infection, she had been walking through cattle fields in her native southern Oregon and was often around cows and horses. It is very possible, she said, a fly landed on her eye and infected her.

When she showed up at Oregon Health and Science University in mid-August 2016, no one knew what was going on with her eye. Some doctors were skeptical of her story.

"When the ophthalmology people checked me out, they said, 'this is probably mucous,'" Beckley recalled. When she heard that, Beckley silently directed her thoughts to the worms: You have to show yourself. Within 30 minutes, she felt that by-now familiar sensation.

"I'll never forget the look on the intern's face when he saw one squiggle across my eye," she said.

Beckley's treating physician, infectious disease specialist Erin Bonura, had already been in touch with the CDC specialists. They suspected it was an eye worm and recommended Beckley keep flushing them out pending a final identification.

Bonura also reassured the young woman this was not likely to be a vision-threatening infection.

"I stayed in contact with her, and we were able to tell her this was very localized, that it was not systemic," the physician said. "She was worried they would crawl into her brain."

In the meantime, a Washington state pathology lab, where some worms were first sent for identification, was unable to identify them. That lab sent two worms to CDC's parasitic diseases lab in Atlanta. As the reference laboratory for rare and unusual parasites, it is the "final stop for anything difficult," CDC's Bradbury said. The lab receives an average of 6,670 specimens a year, virtually all from within the United States.

The CDC confirmed the worms were part of a group of eye worms known as Thelazia, but the scientists did not know which species. They suspected it was the same species that had caused previous infections in humans. For patients, the treatment for any Thelazia infection was the same: removal of the worms.

It was only when Bradbury was preparing to write up the case months later that he and colleagues noticed some of the worms' features, such as the position of the genitalia and the shape of the mouth, looked unusual. Scientific literature was sparse. Bradbury eventually found the 1928 German paper that had pictures of the worm species in question. A CDC colleague and native German speaker helped confirm the text descriptions. Now the case study took on greater significance because this worm had never been found to infect humans.

Parasitic infections often are neglected in the United States, experts said. Beckley's case, they said, is a reminder that whenever there is the intersection of humans, animals and the environment, "there's always that chance of things moving across," Bonura said.

Beckley, now 28, is a sophomore at Southern Oregon University studying psychology. The experience has made her more meticulous about washing her hands. Also, whenever she is sees a lot of flies, "a little part of me says I need to get to the bathroom," to peek at her eyes.

She hopes her ordeal will help others who might find themselves in a similar situation. When she found the first worm, she remembers searching the Internet and finding no information. Now, at least, there will be articles about her if someone types in "worm in eye," Beckley said.

Promoted
Listen to the latest songs, only on JioSaavn.com
"If this does happen to anyone else, I want them to know this girl went through it, and she's fine," she said. "And not to freak out.