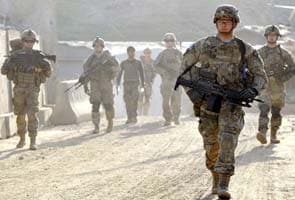 Kabul: Seven US soldiers were killed in two separate attacks in Afghanistan on Saturday, NATO and Western officials in Kabul said, capping off one of the bloodiest weeks for international forces this year.

The attacks underscored the dangers faced by the NATO-led International Security Assistance Force (ISAF), even as they hand over much of the fighting to Afghans ahead of a planned withdrawal next year.

Five US soldiers were killed in the southern battleground province of Kandahar when they were struck by an improvised bomb on Saturday, a spokesman for the US forces and provincial authorities said, adding that it took place in Maiwand district.

Including Saturday's attacks and three air crashes, 21 US military personnel have been killed in the last week. Three British soldiers were also killed on Tuesday by a roadside bomb in the southern province of Helmand.

Maiwand borders Helmand province to the west and is considered one of the most volatile of Kandahar's districts.

Two more US soldiers were killed when an Afghan soldier turned his gun on them in the western province of Farah.

The Taliban claimed responsibility for the shooting attack in an email from spokesman Qari Yousuf Ahmadi.

Promoted
Listen to the latest songs, only on JioSaavn.com
Ahmadi said the soldier he described as an "infiltrated mujahid" turned his weapon on the US troops at a base in the Bala Boluk district of Farah killing four before he was killed. The Taliban routinely overstate casualty numbers.