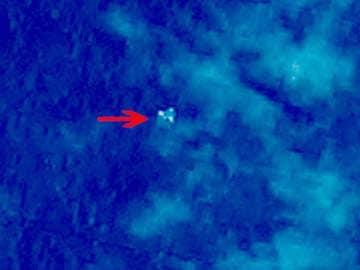 AFP photo/China center for resources satellite data and application (CCRSDA) via the state administration of science, technology and industry for national defence, PRC

Adding to the deepening mystery surrounding the fate of the plane and 239 people on board, the Wall Street Journal reported on Thursday that U.S. investigators suspect the aircraft flew for about four hours after reaching its last confirmed location under conditions that remain murky.

At the same time, China heaped pressure on Malaysia to improve its coordination over the search for the Boeing 777, which disappeared early on Saturday on a flight from Kuala Lumpur to Beijing. Of the 239 people on board, up to 154 were Chinese.

Premier Li Keqiang, speaking at a news conference in Beijing, demanded that the "relevant party" step up coordination while China's civil aviation chief said he wanted a "smoother" flow of information from Malaysia, which has come under heavy criticism for its handling of the disaster.

Vietnamese and Malaysian planes scanned waters where a Chinese government agency website said a satellite had photographed three "suspicious floating objects" on Sunday. The location was close to where the plane, Flight MH370, lost contact with air traffic control.

Aircraft repeatedly circled the area over the South China Sea but were unable to detect any objects, said a Reuters journalist, who was aboard one of the planes.

One U.S. official close to the plane investigation said the Chinese satellite report was a "red herring".

It was the latest in a series of false signals given to the multi-national search team that has been combing 27,000 square nautical miles (93,000 square km), an area the size of Hungary, for the Boeing 777-200ER.

On Wednesday, Malaysia's air force chief said military radar had traced what could have been the jetliner to an area south of the Thai holiday island of Phuket, hundreds of miles to the west of its last known position.

His statement followed a series of conflicting accounts of the flight path of the plane, which left authorities uncertain even which sea to search in for Flight MH370.

The last definitive sighting on civilian radar screens came shortly before 1:30 a.m. on Saturday, less than an hour after the plane took off from Kuala Lumpur, as it flew northeast across the mouth of the Gulf of Thailand.

What happened next remains one of the most baffling puzzles in modern aviation history and the differing accounts put out by various Malaysian officials have drawn criticism of their handling of the crisis.

"The Malaysians deserve to be criticized - their handling of this has been atrocious," said Ernest Bower, a Southeast Asia specialist at the Center for Strategic and International Studies in Washington.

Rodzali Daud, the Malaysian air force chief, told a news conference on Wednesday that an aircraft was plotted on military radar at 2:15 a.m., 200 miles (320 km) northwest of Penang Island off Malaysia's west coast at the northern tip of the Strait of Malacca.

But there has been no confirmation that the unidentified plane was Flight MH370, Rodzali said, and Malaysia was sharing the data with international civilian and military authorities, including those from the United States.

"We are corroborating this," he added. "We are still working with the experts."

According to the data cited by Rodzali, if the radar had spotted the missing plane, the aircraft would have flown for 45 minutes and dropped only about 5,000 feet (1,500 metres) in altitude since its sighting on civilian radar in the Gulf of Thailand.

There was no word on which direction it was then headed, but if this sighting was correct, the plane would have turned sharply west from its original course, travelling hundreds of miles over the Malay Peninsula from the Gulf of Thailand to the Andaman Sea.

This would put it about 200 miles northwest of Penang, in the northern part of the Strait of Malacca, roughly south of Phuket and east of the tip of Indonesia's Aceh province and India's Nicobar island chain.

Indonesia and Thailand have said their militaries detected no sign of any unusual aircraft in their airspace. Malaysia has asked India for help in tracing the aircraft and New Delhi's coastguard planes have joined the search.

The U.S. National Transportation Safety Board said in a statement that its experts in air traffic control and radar who travelled to Kuala Lumpur over the weekend were giving the Malaysians technical help in the search.

A U.S. official in Washington said the experts were shown two sets of radar records, military and civilian, and they both appeared to show the plane turning to the west and across the Malay peninsula.

But the official stressed the records were raw data returns that were not definitive.

A dozen countries are taking part in the search, with 42 ships and 39 aircraft involved.

Authorities have not ruled out any possible cause for the plane's disappearance. Malaysian police have said they were investigating whether any passengers or crew on the plane had personal or psychological problems that might shed light on the mystery, along with the possibility of a hijacking, sabotage or mechanical failure.

Two men on board were discovered by investigators to have false passports, but they were apparently seeking to emigrate illegally to the West.

Promoted
Listen to the latest songs, only on JioSaavn.com
The Boeing 777 has one of the best safety records of any commercial aircraft in service. Its only previous fatal crash came on July 6 last year when Asiana Airlines Flight 214 struck a seawall with its undercarriage on landing in San Francisco, killing three people.

Boeing Co, the U.S. aircraft company that makes the 777, has declined to comment beyond a brief statement saying it was monitoring the situation.
© Thomson Reuters 2014