Sea radiation is another blow to Japan's fishermen 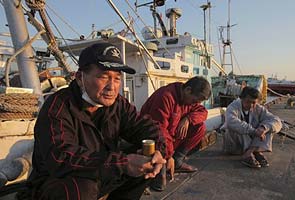 Tokyo: Fishermen who lost their homes and boats in Japan's tsunami now fear radioactive water gushing into the Pacific Ocean from a crippled nuclear plant could cost them their livelihoods.

The contaminated water raised concerns about the safety of seafood in the country that gave the world sushi, prompting the government to set limits for the first time on the amount of radiation permitted in fish.

Authorities insisted the radioactive water would dissipate and posed no immediate threat to sea creatures or people who might eat them. Most experts agreed.

Still, Japanese officials adopted the new standards as a precaution. And the mere suggestion that seafood from Japan could be at any risk stirred worries throughout the fishing industry.

"Even if the government says the fish is safe, people won't want to buy seafood from Fukushima," says Ichiro Yamagata, a fisherman who lived in the shadow of the Fukushima Dai-ichi plant. "We probably can't fish there for several years."

Fukushima is not a major fishing region, and no fishing is allowed in the direct vicinity of the plant. But experts estimate the coastal areas hit by the massive wave account for about a fifth of Japan's annual catch.

India announced Tuesday that it was halting food imports from Japan out of fear of radiation contamination. Few countries have gone so far, but India's three-month ban reflected the unease created by the nuclear crisis among consumers.

India said the ban would last three months or until the risk subsides. It planned to review the situation weekly.

Yamagata, whose home is within the 12-mile (20-kilometer) evacuation zone around the plant, is staying in a Tokyo soccer stadium with his wife and about 140 other refugees. He expects his fishing days are over.

After the magnitude-9.0 earthquake on March 11, he ran outside and watched the second floor of his house collapse, then fled with his family when tsunami warnings sounded.

Since then, he hasn't been allowed to return to check on the 5-ton boat he used to troll for flounder. He assumes it's gone, too. The tsunami killed up to 25,000 people and left tens of thousands homeless as it swamped about 250 miles (400 kilometers) of the northeastern coast and knocked out power to the plant.

Workers there have been desperately trying to cool down overheated reactors, but the effort has required spraying large amounts of water and allowing it to gush out wherever it can escape, sometimes into the sea.

Radioactivity will continue spewing into the air and water until cooling systems are restored.

Past readings were lower, but they were also taken farther from the plant, so the new readings did not necessarily mean that contamination was getting worse.

Japan said some fish caught last week about 50 miles (80 kilometers) from the plant would have exceeded the new limits, which may change as circumstances do.

The radiation standards for fish will be the same as for vegetables. After spinach and milk exceeded safety limits following the quake, health experts said people would still have to eat enormous quantities of tainted produce or dairy before getting even the amount of radiation contained in a CT scan.

Japan imports far more fish than it exports, but it sent the world $2.3 billion worth of seafood last year.

But chef Seiichiro Ogawa said the fuss over radiation could hurt business. His restaurant is trying to get more fish from the western part of Japan, which has not been affected by the nuclear crisis.

"Japanese customers are especially sensitive to this kind of thing, so I'm worried they'll stop eating sushi," said Ogawa, who has already seen his business drop 50 percent after foreigners stopped visiting the city after the quake. "We need this nuclear problem to be resolved."

Back at the nuclear plant about 140 miles (220 kilometers) northeast of Tokyo, there was a rare bit of good news Tuesday: Japan's nuclear safety agency said injections of coagulant seemed to be slowing the flow of highly contaminated water that was spilling directly into the ocean from a crack discovered over the weekend.

Previous attempts to find the leak using milky white bath salts failed, but TEPCO now believes it was able to trace the leak to an area somewhere below a cracked maintenance pit.

TEPCO also said this week it is purposely dumping more than 3 million gallons of low-level radioactive water into the sea to make room in a storage tank for more highly contaminated water that it needs to remove before workers can restore important cooling systems.

That announcement angered Fukushima's federation of fisheries groups, which sent the company a letter of protest.

"Our prefecture's fisherman have lost their lives, fishing boats, piers and buildings due to the Great Eastern Japan Disaster," federation chairman Tetsu Nozaki said in the letter. "This low-level contaminated water has raised fears among fishermen that they will never be able to fish in our prefecture's waters again, and we absolutely want you to stop."

TEPCO's reputation has taken a serious hit in the crisis. On Tuesday, its stock dropped 80 yen -- the maximum daily limit, or 18 percent -- to just 362 yen ($4.30), falling below its previous all-time closing low of 393 yen from December 1951. Since the quake, the share price has plunged 80 percent.

In what could be an effort to counter the bad publicity, Takashi Fujimoto, TEPCO's vice president, said it was offering 20 million yen ($240,000) in "apology money" to each town or city affected by the mandatory evacuation zone around the plant.

That's likely to be little comfort to fisherman Yamagata and his wife, Chiharu, who are angry with TEPCO over the situation.

"All we heard was that the plants were safe, safe, safe," she said. "I feel like they were hiding things from us. Now that radiation is seeping out, it's too late."

Ichiro Yamagata, who is 50, said he would like to return to his home and his job, but he sees no way that could happen. Nearly 17,000 boats have already been reported damaged in three hardest-hit prefectures, and that's just a partial tally.

Some fishing boats that left the harbor immediately after the quake got far enough out to sea that they were safe from the tsunami, Yamagata said, but others were swept away.

For now, the Yamagatas are passing their days at the soccer stadium, sleeping on mats in large rooms sectioned off with blue, knee-high dividers. They have no possessions -- Ichiro Yamagata doesn't even have his driver's license -- and only enough cash in the bank to last six months.

"After that, I'm going to have to find some kind of work," he said. "But fishermen can't be salarymen. I can only do simple jobs."