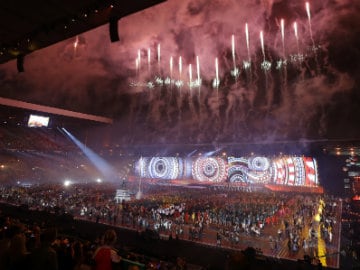 Fireworks explode overhead during the opening ceremony for the Commonwealth Games 2014 in Glasgow, Scotland, Wednesday July 23, 2014.

Glasgow, Scotland: The Loch Ness Monster, tartan-clad bagpipers and giant pieces of shortbread took the place of footballers on the Celtic Park pitch as the Commonwealth Games began with a celebration of Scottish mythology and exports on Wednesday.

Scotland is hosting the 20th edition of the games for former British colonies as its own future as part of Britain could be coming to an end. With an independence referendum coming on Sept. 18, the issue of Scotland's national identity is in sharp focus, and organizers made light of perceptions of the country with a self-deprecating start to the games opened by Queen Elizabeth II.

There was singing on whiskey barrels, the giant rubber Loch Ness Monster and a giant haggis on the pitch during the rapid, often chaotic "Kingdom of the Scots" opening sequence. After rock star Rod Stewart performed at the home of his beloved football club, Scottish champion Celtic, there was a rendition of "Mull of Kintyre" from Susan Boyle, the church volunteer whose soaring voice turned her into an overnight reality TV star.

But after the athletes from the 71 Commonwealth countries and territories completed their parade onto the pitch, the ceremony took on a somber tone as the stadium fell silent to mark the Malaysian Airlines crash. Around a third of the 298 victims were from the Commonwealth. Malaysian athletes also donned black armbands to remember their 44 compatriots who died when the jet was shot down over Ukraine.

The games was officially opened by the Queen after cycling great Chris Hoy, Britain's most decorated Olympian, handed over the baton which has traveled throughout the Commonwealth since starting a relay at Buckingham Palace last year.

The 88-year-old monarch showed her lighter side when Hoy and Prince Tunku Imran, president of the Commonwealth Games Federation, struggled to retrieve the message from the baton she left in it. When the note was finally recovered, the queen flashed a smile and held her arms out aloft before revealing its contents.

The Queen, who is facing the breakup of Britain if Scots vote in favor of independence, reminded the Commonwealth of "our shared ideals and ambitions as a diverse, resourceful and cohesive family."

"Together, you all play a part in strengthening our friendships in this modern and vibrant association of nations," she added.

Promoted
Listen to the latest songs, only on JioSaavn.com
The ceremony used the power of the Commonwealth to appeal to the philanthropy of its members by promoting UNICEF inside the stadium and on the global TV feed. The children's charity raised more than $4 million in donations through text messages within an hour from U.K. text messages alone.