Nearly 1,500 flights were canceled at Detroit and Chicago airports -- more than half at O'Hare, where seven inches (18 cm) of snow had accumulated by noon. 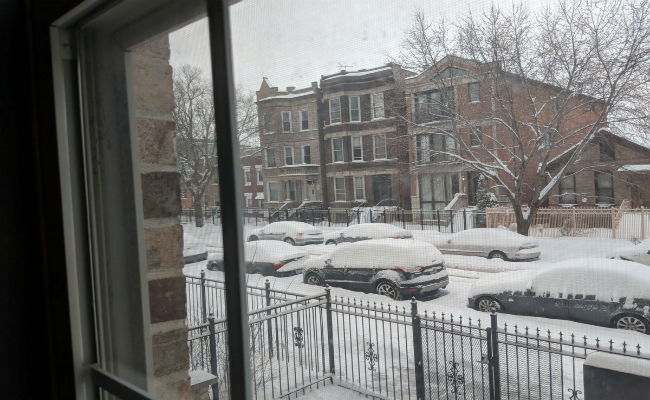 Suburbs of the Chicago metropolitan area had already reached near nine inches of snow. (Reuters)

"Snow will make weather headlines from the greater Chicago metro area to Detroit on Friday, with winter storm warnings in effect," the National Weather Service said in an advisory.

Schools were closed in both cities and multiple car crashes were reported on icy roads. Flight cancelations built up quickly -- especially at Chicago's O'Hare, one of the nation's busiest airports.

The Detroit and Chicago metropolitan areas were forecast to receive as much as nine inches (23 centimeters) of snow, with more than one inch per hour falling in Detroit on Friday morning.

Nearly 1,500 flights were canceled at Detroit and Chicago airports -- more than half at O'Hare, where seven inches (18 cm) of snow had accumulated by noon.

Airlines warned of more cancellations to come at neighboring airports, and allowed passengers to change flight reservations without fees.

"We are getting more snow today, tomorrow and Sunday than we have normally gotten in the last few winters at any one period of time," said Chicago Mayor Rahm Emanuel, encouraging residents to stay indoors.

Some outer suburbs of the Chicago metropolitan area had already reached or were near nine inches of snow Friday afternoon.

The Windy City has not seen this much snow at one time since 2011, when a storm dumped about 20 inches of snow so quickly that drivers had to abandon their cars along a major road.

Officials insisted they were prepared this time, with approximately 300 snowplows to prevent a recurrence. Still, the city experienced dozens of car crashes Thursday evening and early Friday.

Forecasters expected the first round of snowfall to last until Friday evening.

Promoted
Listen to the latest songs, only on JioSaavn.com
The Great Lakes region was expected to see additional snowfall over the weekend, while the current storm was forecast to move eastward to upstate New York and New England regions by Saturday.