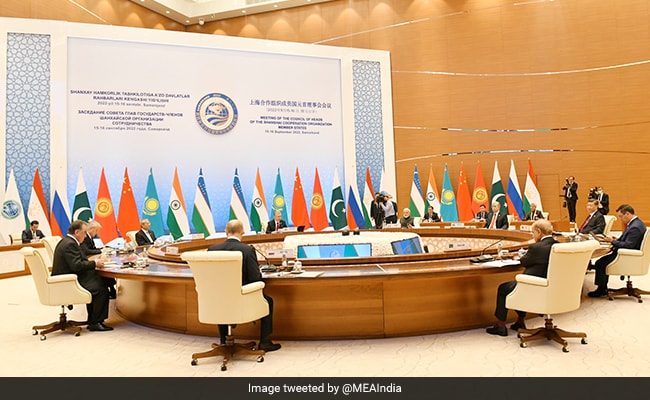 SCO summit 2022: This is the first in-person summit of the bloc in two years.(File)

Here are the Updates on SCO Summit 2022:

Get NDTV UpdatesTurn on notifications to receive alerts as this story develops.
Sep 16, 2022 23:47 (IST)
PM Modi Leaves Samarkand For India As SCO Summit Concludes
Prime Minister Narendra Modi on Friday left Samarkand for India as the 22nd Shanghai Cooperation Organisation (SCO) summit concluded.
PM Modi arrived in Samarkand on Thursday evening to attend the 22nd Summit of the Council of Heads of the SCO Member States (SCO-CoHS).
Sep 16, 2022 19:26 (IST)
India Takes Over SCO Rotating Presidency From Uzbekistan
Uzbekistan on Friday handed over the rotating presidency of the eight-member Shanghai Cooperation Organisation (SCO) to India in this historic city of Samarkand.
Uzbek President Shavkat Mirziyoyev chaired the 22nd SCO summit in Samarkand which was attended by Prime Minister Narendra Modi.
Sep 16, 2022 18:51 (IST)
Now is not the time for war, Prime Minister Narendra Modi on Friday impressed upon Russian President Vladimir Putin as the Ukraine war enters its ninth month.
"Excellency, I know today's time is not a time for war," PM Modi told Putin in Samarkand as the two leaders began their first face-to-face meeting since Moscow's forces invaded Ukrainein February.
It is learnt that the two leaders discussed bilateral, regional and global issues on the sidelines of the Shanghai Cooperation Organisation (SCO) summit. Read here.
Sep 16, 2022 18:47 (IST)

#WATCH | My dear friend, tomorrow you are about to celebrate your birthday...,says Russian President Vladimir Putin to PM Modi ahead of his birthday

Today's era isn't of war & I've spoken to you about it on the call. Today we'll get the opportunity to talk about how can we progress on the path of peace. India-Russia has stayed together with each other for several decades: PM Modi in bilateral meet with Russian President Putin pic.twitter.com/dOZHzHhns5 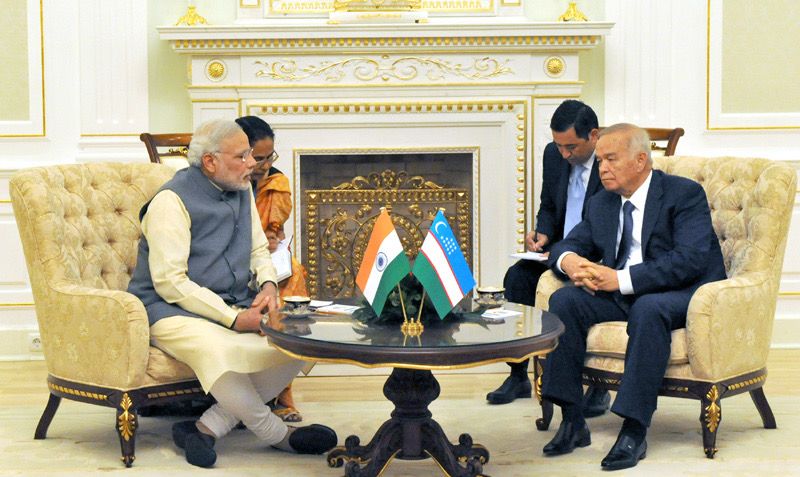 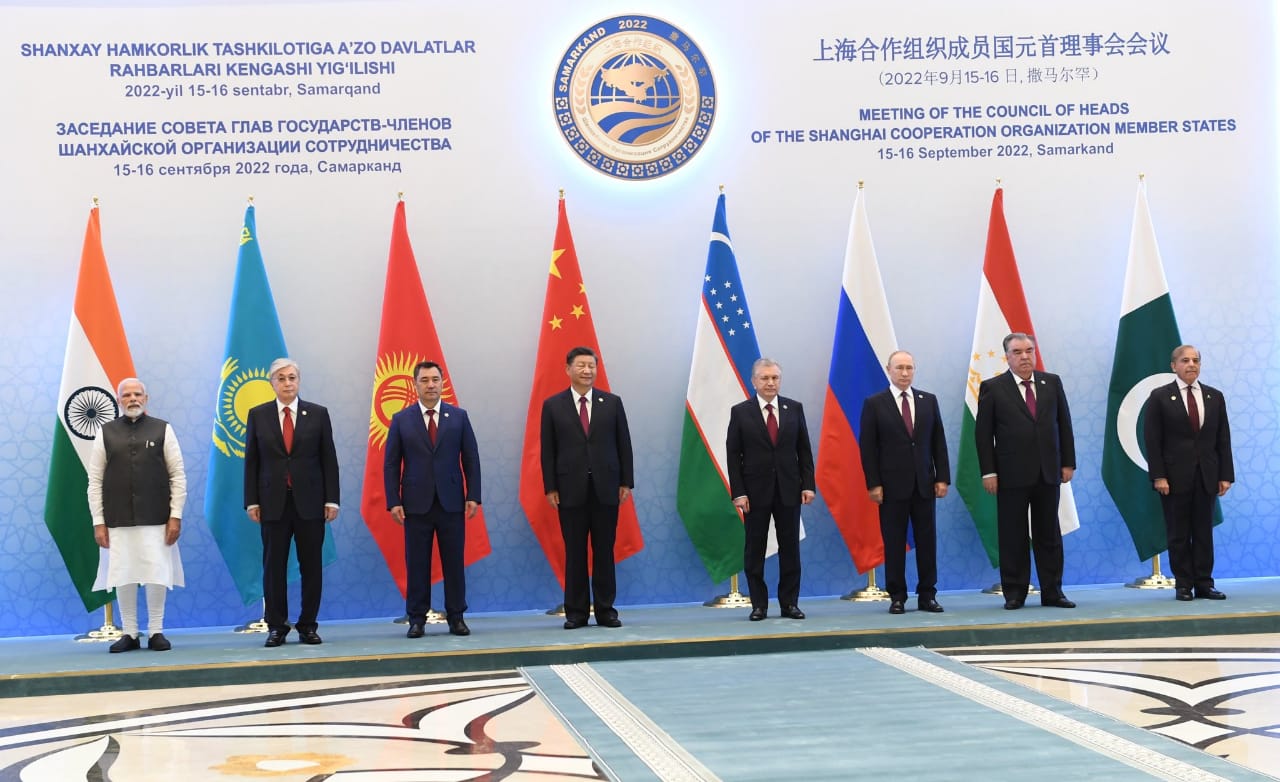 A splendid welcome for PM @narendramodi in Samarkand, Uzbekistan pic.twitter.com/kzzT97L0Ga 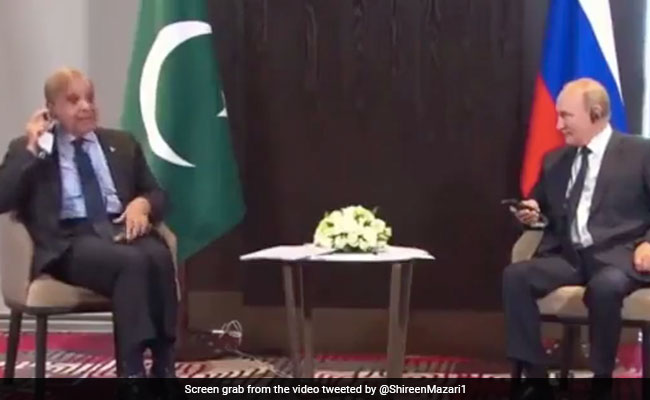 In major "embarrassment", Pakistan Prime Minister Shehbaz Sharif's failed attempt to put on his headphone evoked a laugh from Russian President Vladimir Putin during their meeting yesterday on the sidelines of a regional summit in Uzbekistan.
Sep 16, 2022 09:40 (IST)
PM Modi To Attend SCO Summit In Uzbekistan Today
Prime Minister Narendra Modi will today attend the first in-person summit of the Shanghai Cooperation Organisation in two years in the historic Uzbek city of Samarkand, which will deliberate on major regional security challenges and issues like trade, investment and energy supplies. PM Modi arrived in Samarkand last night to attend the summit of the eight-member SCO grouping which will also see the participation of Russia's Vladimir Putin, China's Xi Jinping, Iran's Ebrahim Raisi, Pakistan's Shehbaz Sharif, and other leaders from the Central Asian countries.
Sep 16, 2022 09:26 (IST)
China's Xi Skips Dinner With Leaders At SCO Summit Due To Covid Policy: Report
Chinese leader Xi Jinping stayed away from a dinner attended by 11 heads of states at a regional security summit in line with his delegation's COVID-19 policy, a source in the Uzbek government told Reuters. He was absent from group photographs published late yesterday when the leaders went for dinner. An Uzbek government source confirmed Xi's absence and said the Chinese delegation cited its COVID-19 policy as the reason.
Sep 16, 2022 09:22 (IST)
China Wants To Make Efforts With Russia To Assume Role Of Great Powers: Xi To Putin
Russian President Vladimir Putin and Chinese leader Xi Jinping met for their first face-to-face talks since the start of the conflict in Ukraine on Thursday, hailing their strategic ties in defiance of the West. Sitting across from each other at two long rounded tables and flanked by aides, the two leaders met on the sidelines of a summit of the Shanghai Cooperation Organisation (SCO) in ex-Soviet Uzbekistan.
The meeting was part of Xi's first trip abroad since the early days of the pandemic. For Putin, it was a chance to show Russia has not been fully isolated despite Western efforts. "China is willing to make efforts with Russia to assume the role of great powers, and play a guiding role to inject stability and positive energy into a world rocked by social turmoil," Xi told Putin at the talks.
Sep 16, 2022 08:37 (IST)
China's Xi To Meet Iran President Raisi At Regional Summit: Report
Chinese President Xi Jinping will have his first face-to-face discussion with his Iranian counterpart Ebrahim Raisi on Friday, state media reported. The meeting comes days after the Europen Union warned that negotiations to bring Iran and the US back into a nuclear deal curbing Tehran's nuclear programme are in "stalemate".
Sep 16, 2022 07:59 (IST)
Leaders Plant Trees Ahead Of SCO Regional Summit In Uzbekistan 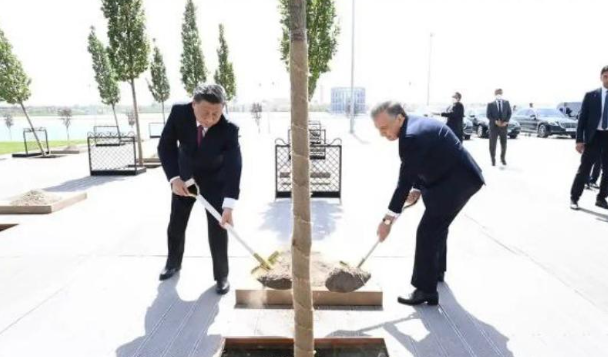 Leaders of the member state of the SCO yesterday participated in a tree planting event near the Congress Centre in the venue complex. However, Chinese President Xi Jinping planted the tree separately along with the Uzbekistan President in the day time before the group events in the evening. PM Modi skipped the pre-summit event as he landed late yesterday in Samarkand.
Sep 16, 2022 07:26 (IST)
PM Modi's Engagements At SCO Summit 2022 Today
9:50 AM: SCO summit will begin
10:30 AM: Restricted 1+1 meeting of SCO leaders
12:10 PM: Extended meeting of SCO leaders
4:10 PM: Bilateral talks with Russia
4:50 PM: Bilateral talks with Uzbekistan
5:30 PM: Bilateral talks with Iran