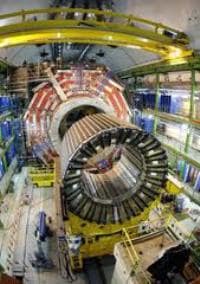 London: Scientists working at the Large Hadron Collider (LHC), the world's biggest particle smasher, have turned masses of data produced by the collider into sound for the first time.

More than 40 million pieces of data are processed by the LHC every second as it seeks to prove the existence of particles such as the Higgs boson, which researchers believe endows everything in the universe with mass.

Until now the LHC, which lies deep in a 17 mile-long tunnel beneath the border between France and Switzerland, has produced colourful images as it produces the data.

This has taken the form of spraying coloured particles in different directions, the Daily Mail reports.

But physicist Lily Asquith, who until recently worked with the LHC at CERN, the European Organisation For Nuclear Research, wanted to be able to 'hear' the particles as well.

So, she used music comparison software to turn data from the collider into sound, thereby giving it another dimension.

"You tend to personify things that you think about a lot," she told radio station NPR. "I think electrons, perhaps, sound like a glockenspiel to me."

"It's quite easy... to consider that there could be some kind of sound associated with these things," she said, according to a CERN statement.

Asquith fed in a sample - three columns of numbers - of the LHC data into the software.

As a beam of particles is shot through the collider, three data points are collected and mapped to sound parameters - the particle travelling away from the internal beam becomes the sound's pitch, the amount of energy of a particle is transformed into volume, and the timing of the notes shows how far the particle travels.

Asquith explained: "So we'll map, for example, the first column of numbers, which may be a distance, to time."

"And we may map the second column of numbers to pitch, and the third, perhaps, to volume."

While the sounds that emerge might not be described as music, they would certainly appeal to avant garde fans.
Comments
Large Hadron CollidersoundCERN