More than two dozen top officials and executives from the United States and Europe boycotted the investment conference over the killing of Jamal Khashoggi. 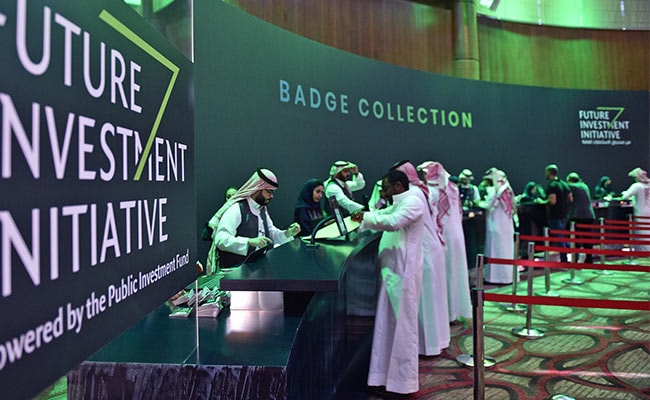 Saudi Arabia said it signed $56 billion of deals at an investment conference this week and expected the United States to remain a key business partner despite a partial boycott of the event over the killing of Saudi journalist Jamal Khashoggi.

More than two dozen top officials and executives from the United States and Europe, including U.S. Treasury Secretary Steven Mnuchin and chief executives of big banks, boycotted the investment conference over the killing of Khashoggi inside the Saudi consulate in Istanbul on Oct. 2.

There was concern that, temporarily at least, commercial ties with the West could be damaged as the blow to Riyadh's reputation and the risk of economic sanctions over the Khashoggi affair made it harder to enter new deals.

Still, the three-day Future Investment Initiative conference drew hundreds of businessmen and government officials from around the world to a palatial venue in Riyadh, aiming to attract foreign capital to support Saudi economic reforms.

"There were more than 25 deals signed worth $56 billion," Saudi Energy Minister Khalid Al-Falih told state television on Thursday, adding that U.S. companies accounted for most of those contracts.

He added: "The U.S. will remain a key part of the Saudi economy because the interests that tie us are bigger than what is being weakened by the failed boycotting campaign of the conference."

Saudi Arabia at first denied any involvement in Khashoggi's death but a Saudi official eventually attributed it to a botched attempt to return him to the kingdom. Turkey has dismissed Saudi efforts to blame rogue operatives and urged Riyadh to search "top to bottom" for those responsible.

Striking a defiant tone, powerful Saudi Crown Prince Mohammed bin Salman told international investors at the conference that the furore over Khashoggi's killing would not derail the kingdom's reform drive.

In protest at the Khashoggi case, British billionaire Richard Branson suspended discussions with Saudi Arabia's Public Investment Fund, which hosted the conference, over a planned $1 billion investment in his group's space ventures.

However, Saudi officials mounted a business as usual campaign to persuade foreign companies to attend the kingdom's premier investment event despite the international outcry over Khashoggi's death.

Many of the big Western banks whose top executives boycotted the conference sent sizeable teams of lower-ranking executives, and continued to meet with Saudi officials on the sidelines of the event, bankers said.

Few senior executives from China and Japan announced they were withdrawing from the event, putting pressure on the Western firms to maintain a presence or risk losing business.

A senior European banker at the conference said that while the Saudi image among some international bond investors had been damaged, investment patterns would probably return to normal in a couple months. "Business has a short memory," he said.

(This story has not been edited by NDTV staff and is auto-generated from a syndicated feed.)
Comments
Future Investment Initiative conferenceJamal KhashoggiSaudi economy