Samsung-Apple lawsuit penalty of 1 billion dollar slashed in half 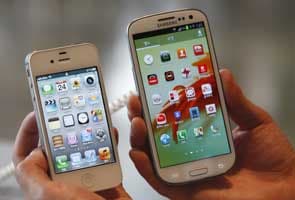 San Francisco: A judge on Friday cut $450 million from a $1 billion award to be paid by Samsung in a landmark patent lawsuit from Apple, saying a jury had wrongly calculated the damages.

US District Judge Lucy Koh affirmed the remainder of the award, amounting to $598.9 million, in the patent infringement case, while denying Apple's request for a bigger penalty.

The decision marked the latest twist in the blockbuster trial pitting the maker of the iPhone against the surging South Korean electronics giant.

Apple had accused its rival of massive and willful copying of its designs and technology for smartphones and tablets.

But Koh said the jury erred in calculating damages for some of the devices in question, including some models of the Galaxy SII smartphone and Galaxy Tab tablet, and struck down as invalid the $450 million awarded to the Silicon Valley giant.

She ruled that a new trial would be needed to award damages for those items, because an "impermissible legal theory" the jury used to calculate the award means that she "cannot reasonably calculate the amount of excess while effectuating the intent of the jury."

But Koh encouraged both parties to have the case reviewed by an appellate court before any new trial.

The judge allowed the award to stand for 14 products, including some Galaxy smartphones and the Galaxy Tab 10.1 tablet, leaving an award of $598.9 million.

The jury relied on Apple's calculation for lost profits dating back to 2010, when it first told Samsung of its objections, but Koh said that in most cases, the damages could only cover the period after the lawsuit was filed in April 2011.

"There are eight phones for which the jury awarded 40 percent of Samsung's profits for the entire period, but for which, during some of the damages period, infringer's profits was not an authorized remedy," the ruling read.

"The only remaining possibility is to conduct a new trial on damages for these eight products."

The judge said Apple could have averted a new trial if it had not pursued an "aggressive" strategy by using an expert report based on a long period of infringement.

"The need for a new trial could have been avoided had Apple chosen a more circumspect strategy or provided more evidence to allow the jury or the court to determine the appropriate award for a shorter notice period," she wrote.

Samsung said in a statement that it was "pleased" with the decision to reduce the damages and added that the company "intends to seek further review as to the remaining award."

"We are also pleased that the court earlier found that Samsung had not acted willfully, denied Apple's request for a permanent injunction, and denied Apple's motion for increased damages," the South Korean firm said.

Telecom analyst Jeff Kagan said the Apple-Samsung battle is "a huge case that just won't end" but will not have an impact on consumers because both firms "are both working on the next generation of devices."

The August jury verdict was seen as a decisive victory for Apple, which has been seeking to boost damages and to ban some Samsung products from the United States.

Apple has been rapidly losing market share to Samsung and other manufacturers that use the free Google Android system in the smartphone and tablet computer markets.

Promoted
Listen to the latest songs, only on JioSaavn.com
Google's Android system was used on 70.1 percent of smartphones shipped in the fourth quarter last year, while Apple held 21 percent of the global market, according to research firm IDC.