The foundation was created as a result of a controversial 2015 bilateral deal, in which Tokyo transferred 1 billion yen ($8.8 million at current exchange rates) as compensation for the victims and Seoul agreed not to raise the issue again. 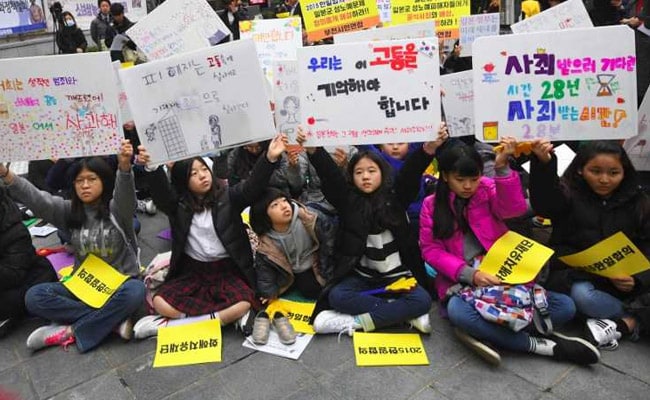 South Korea on Wednesday announced the formal shutdown of a controversial Japanese-funded foundation created to help former wartime sex slaves -- a move that will further sour ties between the neighbours.

The issue of the women forced into sexual slavery for Japanese troops during the Second World War -- so-called "comfort women" -- is a highly emotional one that has marred the relationship between South Korea and its former colonial ruler Japan for decades.

Despite both being democracies, market economies and US allies which have to contend with the twin threats of an overbearing China and nuclear-armed North Korea, ties between Seoul and Tokyo are heavily coloured by disputes over history and territory.

The foundation was created as a result of a controversial 2015 bilateral deal, in which Tokyo transferred 1 billion yen ($8.8 million at current exchange rates) as compensation for the victims and Seoul agreed not to raise the issue again.

But the agreement -- finalised by former South Korean President Park Geun-hye as the US sought to repair its key Asian allies' relationship -- angered some victims who described it as falling short of holding Japan responsible for wartime abuses.

Park's successor and current president Moon Jae-in condemned the deal and his administration earlier this year vowed to return the money to Japan, while falling short of repudiating the pact.

"We... will take legal steps to formally dissolve the Reconciliation and Healing Foundation," said Seoul's gender equality ministry, which oversees the body.

"We have... decided to end the project based on the result of our reviews and current circumstances around the foundation," it said in a statement, adding it would seek to find a "reasonable way to handle" the remaining money sent by Japan.

Dozens of victims or their families have claimed 4.4 billion won ($3.9 million) from the foundation since its inception in 2016. The South's government has since covered the expense with its own funding.

Mainstream historians say up to 200,000 women, mostly from Korea but also from other parts of Asia including China, were forced into sexual slavery for Japanese soldiers.

Many South Koreans harbour resentment over Tokyo's brutal 1910-45 occupation of the peninsula, and the two nations are embroiled in a territorial row as well over Seoul-controlled islets also claimed by Japan.