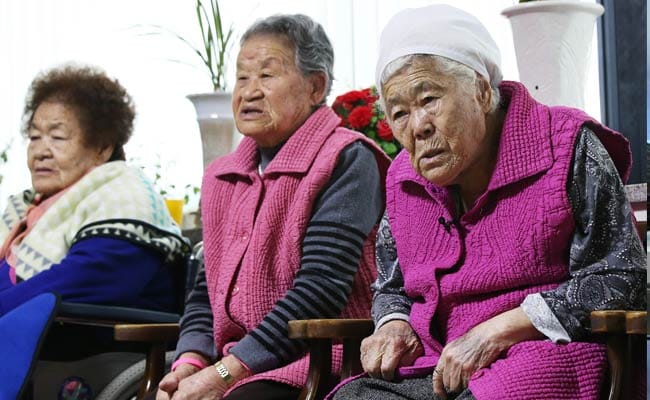 South Korean elderly women who were forced to serve as sex slaves, or so called 'comfort women' for Japanese troops during World War II speaks in Gwangju, Gyeonggi Province, on December 28, 2015. (AFP Photo)

Taipei, Taiwan: Taiwan called on Japan today to apologise and compensate the island's wartime sex slaves after Tokyo and Seoul reached an agreement on the emotive issue.

Japan offered a "heartfelt apology" and a one-billion yen ($8.3 million) payment to the South Koreans, euphemistically known as "comfort women", who were forced into Japanese military brothels during World War II.

The agreement announced Monday was hailed by Japanese Prime Minister Shinzo Abe as a "new era" for relations between the two countries, which had been soured by the unresolved issue.

Taiwan's President Ma Ying-jeou urged Japan, which ruled the island from 1895-1945, to take the same measures over Taiwanese comfort women.

"The government's stance is to demand the Japanese government apologise to the comfort women from our country during World War II, to compensate them, and to return justice and dignity to them," Ma told reporters today.

"We hope the Japanese government can do better and take better care of the comfort women's welfare and dignity. Our stance has not changed."

Foreign Minister David Lin said Taipei had called for further negotiations with Tokyo on the issue.

"We hope for concrete progress for the matter in the near future. Japan understands our demands and is willing to consider," Lin said.

"We think there will be progress on the matter but we can't predict the results."

The issue of comfort women and a Japanese apology remains politically charged in Taiwan, with regular protests.

But time is running out as the number of surviving sex slaves is falling rapidly due to old age. Out of 58 known Taiwanese survivors, 54 have died, according to the Taipei Women's Rescue Foundation which has been assisting the women.

"South Korea is only the beginning and Japan should consider how to resolve the issue with the ageing comfort women in Taiwan, China, the Philippines and Indonesia who expect apology and compensation," said Kang Shu-hua, director of the foundation.

"We hope the last four remaining survivors who now average 91-years-old can obtain a formal response from Japan in the shortest time."