Russians Swear up a Storm as Kremlin Bans Obscenities 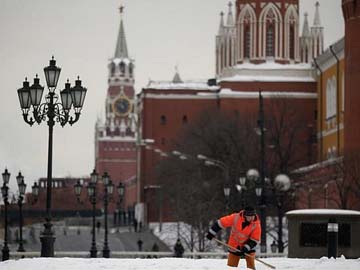 Moscow: Russians have endured countless crackdowns on their freedoms, but a legal ban on using their vast vocabulary of swear words has really got them hot under the collar.

This month's law against swearing in films, theatre and the media has propelled the controversial subject to the forefront of public debate and brought together critics and loyalists of President Vladimir Putin.

At the heart of the discourse is Russia's hugely potent lexicon of obscenities known as "mat," which is centred on four taboo words and an infinite number of their variations.

Describing female and male private parts and sexual intercourse, the words sound more offensive than their English-language equivalents, are considered unprintable and usually bleeped on TV.

Supporters say the ban will help protect the purity of the language and family values.

The measure comes amid the growing influence of the Russian Orthodox Church as well as government calls to protect the Russian language in conflict-torn Ukraine.

But critics say the ban is the latest in a line of clampdowns on freedoms and accused the parliament of hypocrisy since the country's top leadership is believed to resort to curse words in private.

"It won! The State Duma has officially recognised it to be a real threat, the adversary, the enemy, the foe of Russian civilisation, a cancerous tumour on Russian culture," he declared in a column for Snob magazine.

"It has reached the unattainable heights of an enemy of the people: like the name of Trotsky in the Soviet Union, it cannot be mentioned publicly."

Traders will now be obliged to warn consumers about swear words.

The ban has dealt a painful blow to the movie industry since Russian-made films have in recent years used swear words liberally.

Movies featuring obscenities will now not be issued a distribution licence.

The co-producer of "Leviathan", a profanity-laced art-house film by Andrei Zvyagintsev praised for its critical take on Russia's political system, said the law was inappropriate.

The government appeared to bend the law by giving "Leviathan," which won best screenplay at the Cannes Film Festival in May, a distribution licence days before the ban came into effect on July 1.

But other films will be less lucky.

The latest film by cutting-edge director Valeria Gai Germanika, "Yes and Yes", had been shown in cinemas for two days when the ban hit, forcing authorities to pull the plug on its release.

"People cannot watch the film on the big screen, (a film) which was made for the big screen, two years prior to the law," the 30-year-old complained in a radio interview.

"This is an absurdity and a bad dream."

- 'One of greatest inventions' -
Russian taboo words have existed for centuries.

They helped the country survive the brutalities of Stalin-era slave labour camps, win over Nazi Germany in World War II and ride out the turbulence of the Soviet collapse, supporters say.

"Mat is a subtle matter, it is one of the greatest inventions of the Russian people," Mikhalkov, who also runs the Moscow International Film Festival, was quoted as saying recently.

"It is hard to imagine a war movie without obscenities."

Some of the country's best-loved poets such as Mikhail Lermontov in the 19th century and Sergei Yesenin in the early 1920s were known for using swear words in their works.

"The Gulag Archipelago", Alexander Solzhenitsyn's account of the Soviet camp system which received the Nobel Prize for Literature in 1970, is peppered with swear words.

The use of profane language became more prevalent in the dying days of the Soviet Union when this was associated with the arrival of freedom of speech after years of censorship.

Perhaps surprisingly, some experts have welcomed the ban, saying the liberal use of profanities has seen them lose much of their potency in recent years.

"Mat has lost its artistic shock value because of its desacralisation," said linguist Yelena Shmeleva.

Promoted
Listen to the latest songs, only on JioSaavn.com
But novelist Yerofeyev expressed the fear the expletives known for their crude eroticism will become more powerful expressions of hatred after the ban.

"The ban on swearing revives its function of hatred," he wrote. "From a language of filthy commuter trains it is turning into a lethal language of field commanders, orders and reprisals."