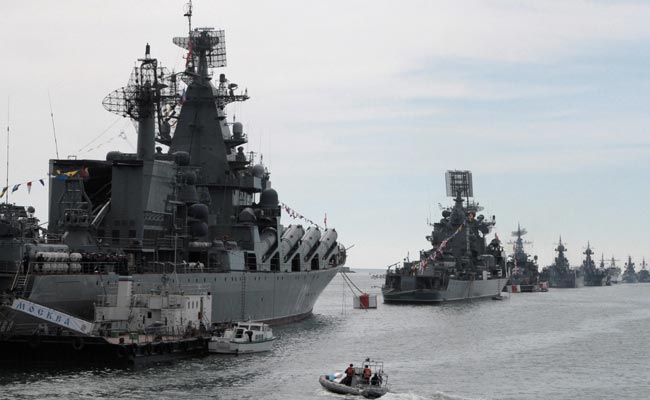 The Russian navy on Saturday thwarted a drone attack on the Sevastopol port. (File)

"All UAVs (unmanned aerial vehicles) have been shot down."

Mr Razvozhayev had earlier said the Russian navy was repelling a drone attack.

"Ships of the Black Sea Fleet are repelling a UVA (unmanned aerial vehicle) in Sevastopol bay," he said in the early hours of Saturday.

The governor said the city's services were on "alert", but said no "civilian infrastructure" had been damaged.

A student dormitory at an art college near the port saw "one windowpane burst" but "no harm was done", he added.

He called on residents of the city not to post videos of the incident on social media.

"It should be clear to everyone that such information is much needed for Ukrainian Nazis in order to understand how the defence of our city is built," he said.

Russia annexed the Crimea peninsula from Ukraine in 2014.

Its forces attacked Ukraine from several directions in February this year, including from Crimea.

The announcement came as Ukrainian forces press a counter-offensive to retake land in the Russian-occupied south.

City authorities said that the harbour was "temporarily" closed to boats and ferries.

Earlier this week, Mr Razvozhayev said that a drone had attacked a thermal power station near Sevastopol.

The Russian fleet stationed in the port had also been attacked by a drone in July.

Pak To Impose Taxes Worth Rs 200 Billion To Comply With IMF Terms: Report