No Survivors As Russian Cargo Plane Crashes In Siberia

The Antonov An-12 aircraft "disappeared from radars" during its final approach outside the eastern city of Irkutsk, the emergencies ministry said. 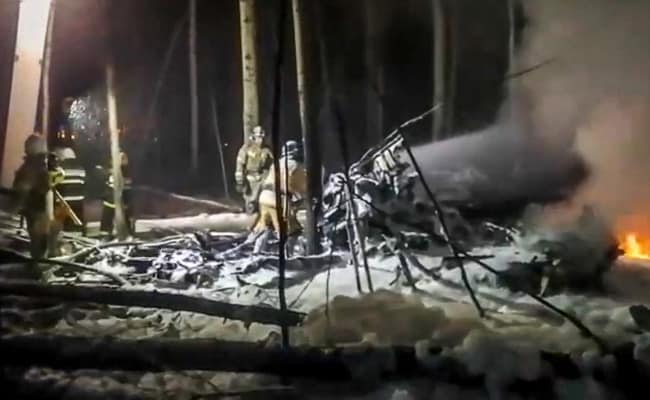 A Russian cargo plane crash landed and caught fire in Siberia on Wednesday leaving no survivors among five to seven people believed to be on board, local authorities said.

The Antonov An-12 aircraft "disappeared from radars" during its final approach outside the eastern city of Irkutsk, the emergencies ministry said on its Telegram channel.

It said a rescue team had arrived at the scene where the aircraft was on fire.

Irkutsk region governor Igor Kobzev told reporters there were no survivors from the crash, adding "between five and seven people" were on board.

Russia's aviation authority, Rosaviatsia, said the aircraft was operated by a Belarusian company and was returning to base after delivering produce to the Far Eastern Chukotka region.

The Belarusian transport ministry said in a statement that the aircraft had seven people on board: two Russian citizens, two Ukrainians and three Belarusians.

The ministry added that the plane was completing a go-around in "difficult weather conditions".

Antonov aircraft were manufactured during the Soviet era and are still used throughout the former Soviet Union for civilian and military transport. They have been involved in a number of accidents in recent years.

In September, six people died when an An-26 transport aircraft crashed outside the Far Eastern city of Khabarovsk.

And in July an An-26 flying over the Far Eastern Kamchatka peninsula crashed, killing all 28 people on board.