Russia-Ukraine War: The Day of Dignity and Freedom marks the pro-European Union protests of 2013/2014 that became known as the Maidan Revolution of Revolution of Dignity. 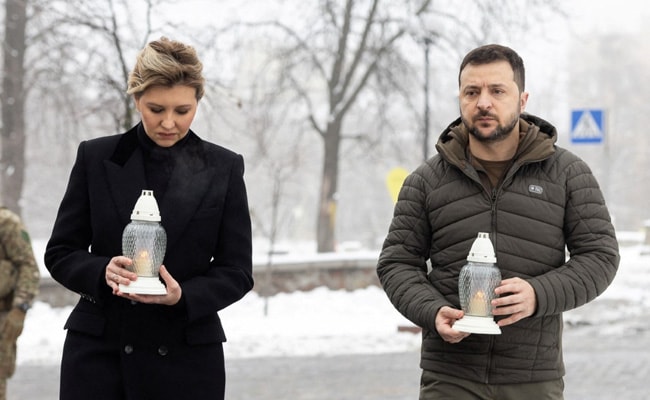 President Volodymyr Zelenskiy marked Ukraine's annual Day of Dignity and Freedom on Monday by celebrating the sacrifices made by Ukrainian people since Russia's invasion and saying his country would endure and prevail.

In a video address to the nation, Zelenskiy hailed the contributions made by Ukrainians - from soldiers, firefighters and medics to teachers giving online lessons, villagers cooking for the military, tailors sewing uniforms and farmers ploughing their fields despite the risk.

"We can be left without money. Without gasoline. Without hot water. Without light. But not without freedom," Zelenskiy said in an address that he delivered standing in an ornate room in the presidential palace in the capital Kyiv.

The Day of Dignity and Freedom marks the pro-European Union protests of 2013/2014 that became known as the Maidan Revolution of Revolution of Dignity, and the 2004 Orange Revolution. In both revolutions, Ukraine's leadership was overthrown.

Highlighting Ukrainians' defiance, Zelenskiy's video included extracts of the address gave on the anniversary a year ago when he wore a suit and tie. This year he wore the khaki T-shirt that has become his trademark during the war.

"What has changed since then (a year ago)? A lot. Craters appeared on our land. There are roadblocks and anti-tank hedgehogs in our cities and villages. It may be dark on our streets. It may be cold in our homes," Zelenskiy said.

He said that in the future Ukrainians would gather on Kyiv's Independence Square, which was central to the events of 2013/14 and 2004, "where we will celebrate the Victory Day of Ukraine. In a peaceful Kyiv, in a peaceful Ukraine."