Russia Will Try To Disrupt The US 2018 Elections, Intelligence Chiefs Warn

Officials said there are efforts underway to blunt Russian meddling, but Democrats warned that no response will work if President Trump denies the threat. 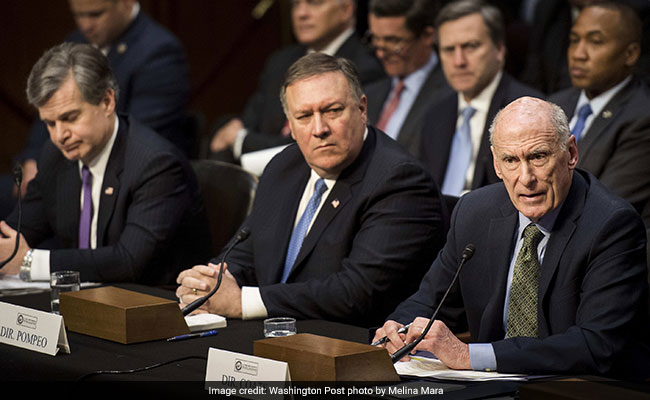 Washington: The nation's top intelligence chiefs were united Tuesday in declaring that Russia is continuing efforts to disrupt the U.S. political system and is targeting the 2018 midterm election, following its successful operation to sow discord in the most recent presidential campaign.

Their assessment stands in contrast to President Donald Trump, who has repeatedly voiced skepticism of Russian meddling in the 2016 election.

At a Senate Intelligence Committee hearing on worldwide threats, Democrats demanded to know what the intelligence community is doing to counter Russia's actions and whether Trump has given explicit directions to them to do so.

"We cannot confront this threat, which is a serious one, without a whole-of-government response when the leader of the government continues to deny that it exists," said Sen. Angus King, I-Maine.

The disconnect between Trump and his senior-most intelligence advisers has raised concerns that the U.S. government will not be able to mount an effective plan to beat back Russian influence operations in the upcoming midterm election. And Director of National Intelligence Daniel Coats said there is "no single agency in charge" of blocking Russian meddling, an admission that drew the ire of Democrats.


"The fact that we don't have clarity about who's in charge means, I believe, we don't have a full plan," said Mark Warner, D-Va., the vice chairman of the committee, which is conducting an investigation into Russian interference in the 2016 election.

He also said social media companies, whose platforms have been fertile turf for Russian bots seeking to stoke divisions among Americans, have been "slow to recognize the threat" and that "they've still got more work to do."

"There should be no doubt that Russia perceives its past efforts" to disrupt the 2016 presidential campaign "as successful and views the 2018 midterm elections as a potential target for Russian influence operations," said Coats, the leader of the U.S. government's 17 intelligence agencies.

His assessment was echoed by all five other intelligence agency heads present at the hearing, including CIA Director Mike Pompeo, who two weeks ago stated publicly that he had "every expectation" that Russia will try to influence the coming election.

The intelligence community's consensus on Russia's intentions led Sen. Jack Reed, D-R.I., to press officials on whether Trump has directed them to take "specific actions to confront and to blunt" Russian interference activities.

FBI Director Christopher Wray said the bureau is undertaking "a lot of specific activities" to counter Russian meddling but was "not specifically directed by the president." And Pompeo added that Trump "has made very clear we have an obligation" to make sure policymakers have a deep understanding of the Russia threat.

Coats also said the intelligence agencies "pass onto the policymakers, including the president," relevant intelligence.

Reed pressed on his question: "Passing on relevant intelligence is not actively disrupting the operations of an opponent. Do you agree?"

Coats said, "We take all kinds of steps to disrupt Russian activities."

Pompeo added: "Senator Reed, we have a significant effort. I'm happy to talk about it in closed session."

A visibly frustrated Reed responded: "The simple question I've posed is, has the president directed the intelligence community in a coordinated effort, not merely to report but to actively stop this activity, and the answer seems to be that . . . the reporting is going on, as reporting [goes on] about every threat going into the United States."

Earlier in the hearing, Pompeo said that the intelligence community has offensive "capabilities" to "raise the costs to adversaries" seeking to hack into election systems to disrupt voting.

He took issue with King's suggestion that the U.S. government has not taken actions to deter adversaries in cyberspace. "Your statement that we have done nothing does not reflect the responses that, frankly, some of us at this table have engaged in - that the U.S. government has engaged in - both during and before this administration," Pompeo said.

King, citing the nuclear doomsday movie "Dr. Strangelove," said "deterrence doesn't work unless the other side knows" about the weapon.

"It's true - it's important that the adversary knows," Pompeo said. "It's not a requirement that the world know it."

Asked whether the adversary knows about U.S. actions, he said, "I'd prefer to leave that for another forum."

In a hearing that ranged over several subjects, the intelligence chiefs also said that North Korea's presence at the Olympics in South Korea, which saw a historic visit by North Korean leader Kim Jong Un's sister, had not changed the intelligence community's assessment that the regime is trying to build nuclear weapons to threaten its neighbors and the United States.

"The decision time is becoming ever closer in terms of how we respond" to North Korea's weapons development, Coats said.

Pompeo said his agency has completed an analysis of how North Korea would respond to a U.S. military strike, as well as what it would take to bring the regime to the negotiating table. He offered to describe that analysis only in a closed, classified session.

Pompeo also responded to reporting last week by the New York Times and the Intercept about an intelligence operation to retrieve classified National Security Agency information believed to have been stolen by Russia. The Times reported that U.S. spies had been bilked out of $100,000, paid to a shadowy Russian who claimed to be able to deliver the secrets as well as compromising information about Trump.

Pompeo categorically denied that the intelligence agency had paid any such money, directly or indirectly. He claimed that the newspaper had been duped by the same person trying to sell the U.S. government information that turned out to be bogus.

Promoted
Listen to the latest songs, only on JioSaavn.com
At the end of the hearing, Committee Chairman Richard Burr, R-N.C., said that the panel hoped to release publicly the findings of its Russia investigation "before the primaries begin" in March. Their probe includes a review of the intelligence community's January 2017 assessment on Russian interference, he said. That assessment concluded that the Russians wanted to help get Trump elected.