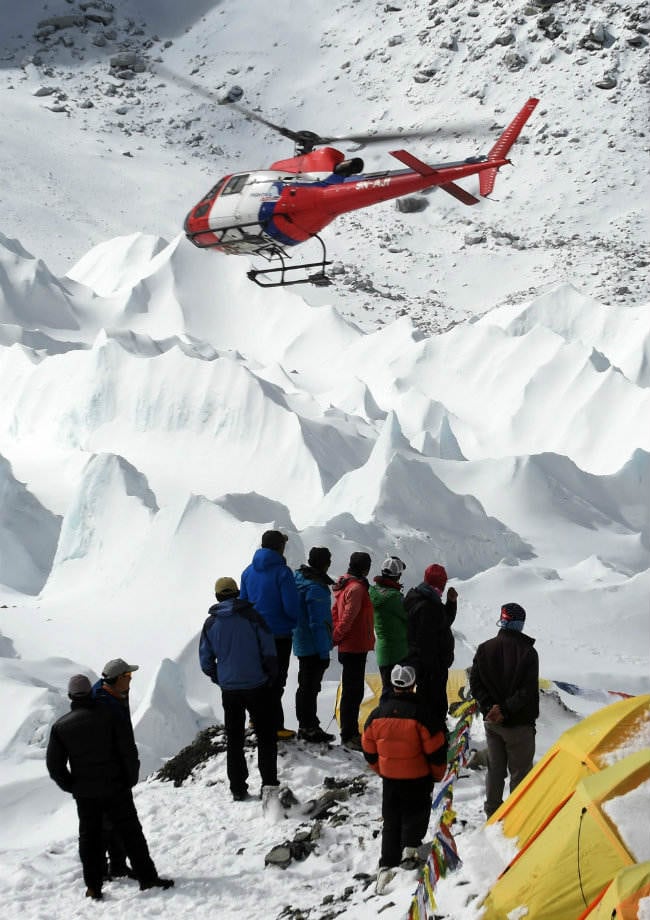 Nepali sherpas and other Nepali members of expeditons watch as a rescue helicopter takes off with the injured from Everest Base Camp. (AFP Photo)

Romanian climber Alex Gavan said on Twitter that three helicopters had reached camps 1 and 2, which are at altitudes of more than 6,000 metres (20,000 feet). Each helicopter is only capable of carrying two climbers due to the thin air, Gavan said from base camp.

Carsten Lillelund Pedersen, a climber from Denmark, posted a video on Facebook showing a helicopter landing to evacuate two climbers and then taking off again 30 seconds later. The weather conditions were clear.

Survivors on Everest described a cloud of rock and ice that smashed into base camp on Saturday. More than 60 people were injured, leading climbers to send frantic messages calling for helicopter assistance to evacuate the wounded.

An estimated 100 climbers and guides were safe but trapped at camps 1 and 2 by Saturday's 7.9 magnitude earthquake which rendered the treacherous Khumbu icefalls leading up to them from base camp impassable.

Japan's foreign ministry on Monday said a Japanese man was among those killed on the Everest, the fourth foreign national claimed by the avalanche.

Three Americans were killed, the U.S. State Department said on Sunday, including a Google engineer, a medic and a filmmaker.