Republicans Make Gains In US Midterms But No 'Red Wave'

US Midterm elections: Republicans seemed on track to reclaim the House for the first time since 2018 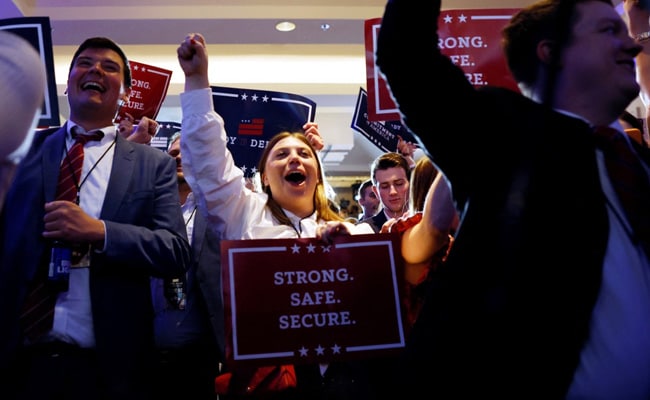 Republicans appeared poised Wednesday to eke out a slim majority in the US House of Representatives but their hopes of a "red wave" in midterm elections were dashed as President Joe Biden's Democrats outperformed expectations.

It was a disappointing night for Donald Trump, who was counting on a powerful Republican showing to boost his expected 2024 run to return to White House.

He also saw his main rival for the party's presidential nomination, Ron DeSantis, record a thumping victory to remain governor of Florida.

With three key races yet to be called after Tuesday's vote, the Senate remained in play but it was leaning Democratic and control may hinge on a runoff election in the southern state of Georgia in December.

Republicans seemed on track to reclaim the 435-member House for the first time since 2018, but by a handful of seats, a far cry from their predictions.

Top Republican Kevin McCarthy, who had forecast a pickup of as many as 60 House seats, put on a brave face after the underwhelming showing.

"It is clear that we are going to take the House back," said McCarthy, who hopes to be the lower chamber's next speaker.

While the night saw wins by more than 100 Republicans embracing Trump's "Big Lie" that Biden stole the 2020 election, several high-profile acolytes of the former president came up short.

"Many of the candidates he endorsed underperformed and cost their party a chance at picking up seats that should have been winnable," said Jon Rogowski, a political science professor at the University of Chicago.

"Not only did voters reject many of Trump's candidates, but they also rejected his policies," Rogowski said, citing abortion as an example.

In ballot initiatives in five states, voters supported abortion rights in a rejection of the conservative-dominated Supreme Court's ruling in June that overturned a constitutional right to the procedure.

Aiming to deliver a rebuke to Biden against a backdrop of sky-high inflation and bitter culture wars, Republicans needed just one extra seat to wrest control of the evenly divided Senate.

But by Wednesday the only seat to change hands went to the Democrats, with John Fetterman, a burly champion of progressive economic policies, triumphing in Pennsylvania over Trump-endorsed celebrity doctor Mehmet Oz.

South Carolina Senator Lindsey Graham, a top Trump ally, bluntly conceded to NBC that the election is "definitely not a Republican wave, that's for darn sure."

A Republican-held House could still derail Biden's agenda, launching investigations, scuttling his ambitions on climate change and scrutinizing the billions of US dollars to help Ukraine fight Russia.

The president's party has traditionally lost seats in midterm elections, and with Biden's ratings stuck in the low 40s and Republicans pounding him over inflation and crime, pundits had predicted a drubbing.

That would have raised tough questions on whether America's oldest-ever commander in chief, who turns 80 this month, should run again.

Instead Biden stands to emerge in much better shape than either of his Democratic predecessors, Barack Obama or Bill Clinton, who both took a hammering at the midterms.

Democrats need two more wins to hold the Senate, while Republicans need two to flip it.

Wisconsin's incumbent Republican Senator Ron Johnson was declared the winner on Wednesday, but counting the remaining votes in Senate races in Arizona and Nevada could take days.

Georgia is to hold a runoff on December 6 after neither candidate crossed the 50 percent threshold needed for victory in the Senate race there.

On a night of close contests, one of the most decisive wins was for DeSantis, who won the gubernatorial race overwhelmingly in Florida.

DeSantis, who has railed against Covid-19 mitigation measures and transgender rights, won by nearly 20 points in what used to be a swing state.

"I have only begun to fight," the 44-year-old DeSantis told a noisy victory party.

Trump, who faces criminal probes over taking top secret documents from the White House and trying to overturn the 2020 election, has not yet formally entered the 2024 presidential fray but has announced plans to make a major announcement on November 15.

On Tuesday, the 76-year-old former president returned to his playbook of airing unsubstantiated claims of fraud.

In Arizona, Trump and his chosen candidate for governor, Kari Lake, alleged irregularities after problems with voting machines.

Officials in the most populous county of Maricopa said about 20 percent of the 223 polling stations experienced difficulties related to scanners but that no one was denied the right to vote.

Ahead of polling day, Biden had warned that Republicans pose a dire threat to democracy, calling out their growing embrace of voter conspiracy theories that fueled last year's storming of the Capitol.