Angel Gahona was shot dead as he was describing a damaged cash machine while videoing with his phone as a cameraman filmed behind him. 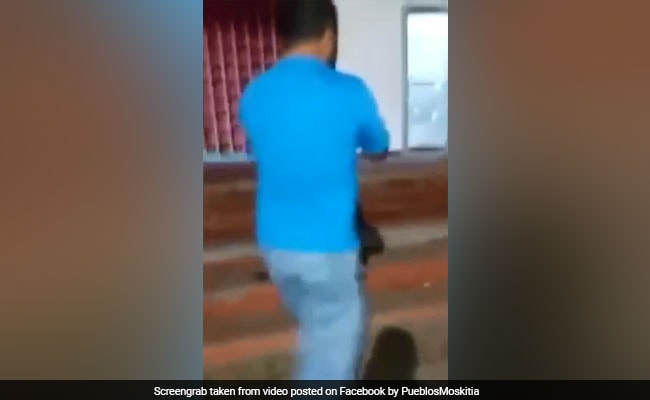 Angel Gahona was reporting live in the town of Bluefields in the country's southern Caribbean coast.

Managua, Nicaragua: A reporter was shot and killed during a live broadcast from an area of Nicaragua roiled by violent anti-government protests this week, local media reported on Saturday night.

The man, identified in Nicaraguan media as Angel Gahona, was reporting live in the town of Bluefields in the country's southern Caribbean coast, when a shot rang out and he fell to the ground bleeding in the head, video footage showed.

Gahona was describing a damaged cash machine while videoing with his phone as a cameraman filmed behind him. Local newspaper El Nuevo Diario said he was broadcasting live on Facebook.

The shot ended his commentary, sending Gahona tumbling down the steps in front of the building. He then lay prone as people screamed his name and rushed to help, the footage showed.

Neither authorities in Managua, nor Lissett Guido, a spokeswoman for the Red Cross in Nicaragua, were immediately able to independently confirm details of the incident, which quickly spread onto national, international and social media.

Nicaraguan media said Gahona, who was described as a journalist from the area, died from his injuries.

It was not clear who had fired the shot. Nicaraguan newspaper La Prensa quoted another journalist as saying only police and groups fighting the protesters were armed there.

Before the incident, the Red Cross said at least six people had died since protests began on Wednesday against government plans to increase worker contributions and lower pensions, causing a crisis for President Daniel Ortega.

Local human rights groups reported that as many as 25 people had died by Saturday. Guido of the Red Cross could not confirm any new total, saying only that she was aware of more deaths.

Promoted
Listen to the latest songs, only on JioSaavn.com
(Reporting by Oswaldo Rivas; Editing by Stephen Coates)
© Thomson Reuters 2018