The coin was one of six prepared by the Royal Mint when Edward became king in 1936 and was due to be mass-produced for general circulation from January. 1 1937. 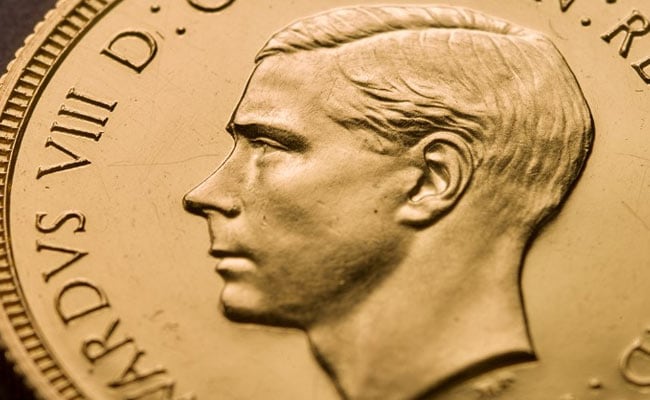 The coin was one of six prepared by the Royal Mint when Edward became king in 1936.

A rare 1937 Edward VIII sovereign coin has been bought by a private collector for 1 million pounds ($1.31 million), making it the most expensive British coin ever.

The coin was one of six prepared by the Royal Mint when Edward became king in 1936 and was due to be mass-produced for general circulation from January 1, 1937.

But he abdicated in December 1936 - quitting his job as a king - to marry American divorcee Wallis Simpson, meaning that production was cancelled and coinage with his face never entered circulation.

Edward VIII insisted that the portrait show his left side, which he preferred, breaking the tradition of each new monarch facing the opposite direction to their predecessor.

He wanted to show his parting to break up an otherwise solid fringe of hair, the Royal Mint said.

The coin is a sovereign: a type of gold coin with a face value of one pound. It is no longer in circulation but is still accepted as legal tender in Britain.

Made from 22-carat gold, it is slightly smaller and lighter than a modern pound coin, measuring 22 millimetres in diameter and weighing 7.98 grams.

"The Edward VIII Sovereign is one of the rarest and most collectable coins in the world, so it's no surprise that it has set a new record for British coinage," said Rebecca Morgan, head of collector services for the 1,100-year-old Royal Mint.

Of the six originally struck, four are in museums and institutions and two are privately owned.

Their existence was not widely known until 1970, as they were locked away and not treated as part of the Royal Mint museum's collection, because of the sensitivity of Edward's abdication.

The Royal Mint sourced this particular coin from a collector in the United States to bring it back to Britain for the new buyer.