'Raise Your Voice, Not Sea Level': UN on Climate Talks 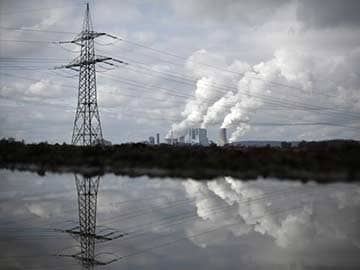 The coal power plant of German utility RWE Power is reflected in a puddle near the western town of Neurath February 28, 2014.

"We have very, very alarming news from science," UN climate chief Christiana Figueres told reporters in Bonn at a new round of talks on global warming.

"Greenhouse gas concentrations continue to rise, with the most threatening impact happening on small island states."

UN Secretary General Ban Ki-moon said the world's 52 small island states contributed less than one percent of greenhouse-gas emissions annually, yet found themselves "on the front lines" in terms of impacts.

"I urge everyone to think about the plight of small island developing states and to take inspiration from their efforts to address climate change, strengthen resilience and work for a sustainable future," Ban said in a press statement.

"Raise your voice, not the sea level. Planet Earth is our shared island. Let us join forces to protect it."

The 12-day Bonn talks, which began on Wednesday, seek to overcome some of the many obstacles towards a post-2020 pact to roll back heat-trapping fossil-fuel gases.

The deal, aimed at limiting warming to two degrees Celsius (3.6 degrees Fahrenheit) over pre-industrial levels, is due to be finalised in Paris at the end of 2015.

But the talks are hampered by labyrinthine complexity and squabbling over which countries should shoulder most of the bill.

The Bonn session is a stepping stone to a special UN climate summit in September and the annual decision-making conference in December in Lima under the UN Framework Convention on Climate Change (UNFCCC) banner.

It takes place against a backdrop of grim news from the UN's Intergovernmental Panel on Climate Change (IPCC), which fears that by 2100 the planet will be up to 4.8 C warmer and sea levels 26-82 centimetres (10-32 inches) higher.

Ministers from three small island countries - Grenada, the Maldives and the Marshall Islands - said Wednesday their nations were already being hit by a mutating climate, notably by salt intrusion into coastal fields and declining fish catches.

The Maldives, as a result, is having to ship drinking water to many inhabitants, said its environment minister, Adullahi Majeed.

Promoted
Listen to the latest songs, only on JioSaavn.com
"This costs us millions of dollars," he said.

"We don't have much time to drag our feet and debate the issues. The science is very clear and we all know what to do."