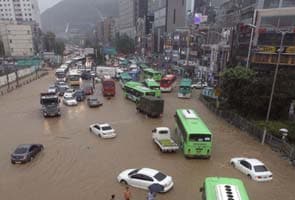 Seoul: Walls of mud barreling down a hill buried 10 college students sleeping in a resort cabin and flash floods submerged the streets and subway stations in Seoul, killing at least 36 people on Wednesday in South Korea's heaviest rains this year.

The students were engulfed by a landslide in Chuncheon, about 68 miles (110 kilometres) northeast of Seoul, said fire marshal Byun In-soo. A married couple and a convenience store owner also died.

Witnesses interviewed on television said the landslide sounded like a massive explosion or a freight train. They described people screaming as buildings were carried away by rivers of mud.

About 670 firefighters, soldiers, police and others rushed to rescue those trapped and extract the dead from the mud and wreckage in Chuncheon, where 24 others were injured and several buildings destroyed.

Yonhap news agency reported the 10 students attended Inha University in Incheon, but did not confirm they all were South Korean. The group was volunteering at a local elementary school.

In southern Seoul, 16 people died when mud crashed through homes at the foot of a mountain. The National Emergency Management Agency reported seven deaths due to flooding in a stream just south of the capital and said the toll was expected to rise as dozens of people were missing.

Fast-moving mudwaters filled the streets in Seoul on Wednesday, sending residents scrambling to the roofs of their partially submerged cars.

Water filled some subway stations and spewed from sewers. TV images showed people in one flooded subway station using shovels, brooms and a wooden board in an effort to keep more rain from coming in. Yonhap reported Internet and wireless connections failed in southern Seoul due to power failures.

Footage showed officials rescuing hikers stranded on mountainsides. People plodded down streets covered with knee-deep water, many barefoot, their pants rolled up. In Seoul's center, cars were restricted from entering the lower part of a submerged two-level bridge.

Heavy rain since Tuesday left about 620 people homeless and flooded 720 houses and about 100 vehicles throughout South Korea, the emergency management agency said.

About 17 inches (440 millimeters) of rain fell on Seoul and more than 13 inches (340 millimetres) on Chuncheon in the last two days, about 15 times more than the average two-day rainfall at this time of year, according to the state-run Korea Meteorological Administration.

Weather officials said another 10 inches (254 millimeters) could fall in northern South Korea, including Seoul, through Friday.

Seoul, a bustling capital of 10 million, shut down portions of two major highways stretching along each side of the main Han River because of high water, said disaster official Kim Ji-hwan.

A dam located just east of Seoul was discharging 16,400 tons of water per second, said Cha Jun-ho from the Han River Flood Control Office. The dam already discharged about 1,000 tons per second days before the recent downpours.

Promoted
Listen to the latest songs, only on JioSaavn.com
People in Seoul, where smartphones are ubiquitous, posted dozens of photos on Twitter and Facebook showing inundated streets and mud-covered cars. Many complained online that Seoul had neglected to prepare for the downpours.