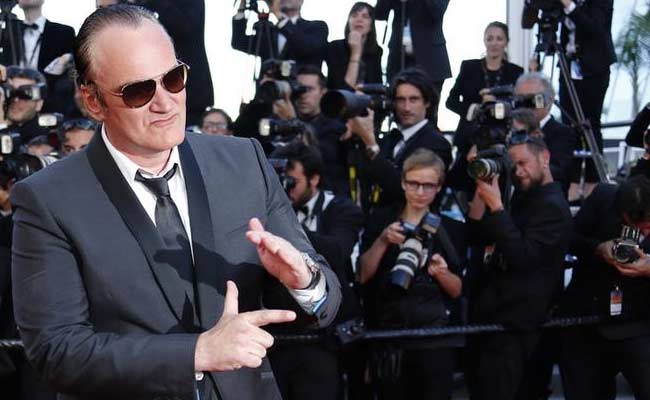 Director Quentin Tarantino poses on the red carpet as he arrives at the closing ceremony of the 67th Cannes Film Festival in Cannes May 24, 2014. (Reuters photo)

New York: Protesters against police killings of black civilians rallied around movie director Quentin Tarantino on Thursday in the face of mounting calls by U.S. police unions to boycott his movies.

Police in Los Angeles and Philadelphia this week joined counterparts in New York in calling for a boycott after the Oscar-winning "Pulp Fiction" director described police as murderers at a rally in New York.

Public outrage over the deaths of black men at the hands of police in New York, Missouri, Baltimore, South Carolina and elsewhere has spurred protests and prosecutions of police nationwide for more than a year.

Carl Dix, one of the organizers of Saturday's rally, said the attacks on Tarantino were aimed at sending a message to "anyone whose voice carries great weight in society: if you speak out, we will come after you, threaten your livelihood and attempt to scare you back into silence."

"They want the people who suffer the brunt of this brutality alone and ignored. This is unacceptable," Dix, a co-founder of the group Rise Up October, said in a statement.

Tarantino's violent, anti-slavery movie "Django Unchained" won an Oscar two years ago. His latest movie, "The Hateful Eight" about bounty hunters in post-Civil War Wyoming, opens in U.S. movie theaters on December 25 and is seen as a contender for this year's Academy Awards.

Tarantino has not commented on the police backlash and the boycott calls are not expected to have a significant impact on the box office for his films, which are admired in Hollywood but not always big commercial draws.

Craig Lally, president of the Los Angeles Police Protective League, called Tarantino's comments "inflammatory rhetoric," and said in a statement that members support a boycott of his films.

Jazz musician Arturo O'Farrill, in a statement supporting Tarantino, said the United States is "a free nation in which an artist, or any citizen, (is) allowed to speak their mind without fear of retribution."
© Thomson Reuters 2015