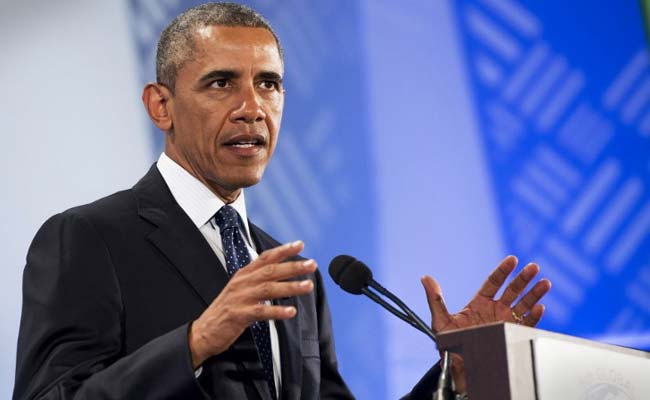 Paris: President Barack Obama's plan to slash electricity-generated CO2 emissions was welcomed today as a courageous step towards a lower-carbon future, but not yet enough to brake dangerous planet warming.

Politicians and analysts said Obama's Clean Power Plan, which faces fierce opposition in Republican quarters back home, should foster global goodwill and spur the international effort to pin down a climate rescue pact by year-end.

But much more was needed, from the US and other nations, to get the world on track to meet the UN goal of limiting average global warming to two degrees Celsius (3.6 degrees Fahrenheit) over pre-Industrial Revolution levels, they warned.

French President Francois Hollande said the first plan ever to limit US power plant emissions would be a "major contribution to the success" of the November 30-December 11 UN conference his country will host to ink a new global climate deal.

Hollande hailed Obama's "courage" in the face of Republican recriminations and the threat of legal action by the lobby group American Coalition for Clean Coal Electricity.

Obama announced Monday that power plant owners must cut carbon dioxide emissions by 32 per cent from 2005 levels by 2030.

Power stations account for about 40 per cent of US emissions of CO2 -- the most abundant greenhouse gas and the main contributor to manmade global warming.

The United States is the world's second-largest greenhouse gas emitter after China.

The US has pledged a 26-28 per cent reduction from 2005 levels by 2025, and the Clean Power Plan is part of the strategy for getting there.

"This is definitely a step change... from what has been happening so far in the power sector in the US," climate policy analyst Niklas Hoehne of the New Climate Institute, a research body, told AFP.

"On the negative side, while it is an important step towards meeting the US' international pledge, on its own, it is not enough."

There was a "gap" of about 1.5 gigatonnes (a gigatonne is a billion tonnes) between the emissions-curbing target in the US INDC, and the actions the country was taking, said Hoehne.

The new plan has reduced the shortfall, on paper at least, by about a third -- some 500 megatonnes.

But the INDC itself may not be adequate.

A measure dubbed the Climate Action Tracker, to which Hoehne contributes, says the US target has "medium" ambition -- as did those of the other top three emitters: the EU and China.

"If all countries would do what the US does, we are more on a pathway towards 3-4 C," said Hoehne.

Pierre Radanne, a French energy expert, said the US curbs were weak compared to the EU's aim to cut emissions by 40 per cent by 2030 over 1990 levels.

"The US cannot stay at this level. This is not leadership," said Radanne, noting that the US target would represent a mere 13 per cent reduction if measured from 1990 to 2030.

But many highlighted the significance of Obama's actions.

UN Environment Programme head Achim Steiner welcomed the plan as "an important signal" ahead of the Paris Conference of Parties, and said it "increases the momentum."

"President Obama's opponents are absolutely right to call it a 'war on coal'," added Richard Black, director of the Energy and Climate Intelligence Unit, a think-tank.

"That's exactly what it has to be, given the science indicating that about 80 percent of known coal reserves have to be left in the ground if climate change is to be kept within manageable bounds."

The World Resources Institute's Andrew Steer said the new plan could be implemented "without technical or financial impediment, and in a manner that is likely to promote more, not less, economic prosperity."

Climate economist Nicholas Stern pointed out that coal emitted twice as much natural gas per unit of electricity generated than natural gas burnt in a power station.

"Curbing pollution from power stations in the United States will improve the health of Americans, strengthen its economy, spur innovation and growth, create jobs and opportunities, set a powerful example for the rest of the world, and promote the prospect of a more ambitious international agreement on climate change," he said.