Twenty-two workers were entombed hundreds of metres underground at the Hushan mine near Qixia city in east China's Shandong province after a January 10 explosion sealed the entrance and cut off communications. 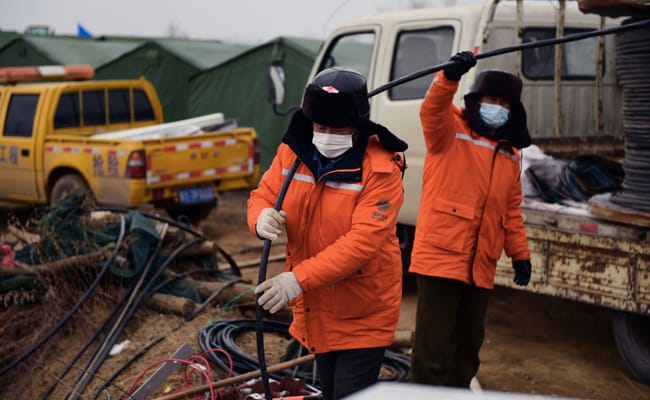 21 workers are trapped for almost two weeks in mine mishap.

Chinese rescuers drilled deep into the ground Thursday in an increasingly desperate bid to save 21 miners now trapped for almost two weeks, with one confirmed dead and still no signs of life from over half of the missing workers, state media reported.

Twenty-two workers were entombed hundreds of metres underground at the Hushan mine near Qixia city in east China's Shandong province after a January 10 explosion sealed the entrance and cut off communications.

Contact has been established with one group of miners, although one, seriously injured in the initial explosion, was confirmed dead late Wednesday.

Another is believed to be trapped on his own, one hundred metres further down in rising waters, but his condition is unknown as he has not been directly reached by the rescue teams above.

The second group of 11 miners have also yet to be contacted, despite rescuers' efforts.

"They have also been lowering life detectors and nutrient solutions to other sections to locate the other missing miners but continued to receive no life signs," state news agency Xinhua reported.

Rescuers made contact on Sunday with a first group of 11 miners at a site around 580 metres (1,900 feet) below the surface.

Emergency responders have drilled two "lifeline" channels to deliver food and medicine and installed a telephone line while trying to widen a shaft to eventually allow the miners to be extracted.

The workers said they were trapped by "two underground explosions" in the mine but details are still being confirmed, reported China Daily Thursday.

There are plans for the widest of the shafts, about the size of a manhole cover, to be broadened enough to extract the miners once drilling is finished, CCTV said Wednesday.

The progress of the rescue has been slow because they are drilling through granite, officials have said, while the extraction could be further complicated by the water-logged state of the mine.

Rescue teams initially lost precious time as it took more than a day for the accident to be reported.

Both the local Communist Party secretary and the mayor have been sacked over the 30-hour delay and an official investigation is under way to determine the cause of the explosion.

Mining accidents are common in China, where the industry has a poor safety record and regulations are often weakly enforced.

In December, 23 workers died after being stuck underground in the southwestern city of Chongqing.