Putin Describes India And China As "Close Allies And Partners"

Vladimir Putin made the remarks during a press conference in Kazakhstan's capital Astana, where he was on a visit to attend the first Russia-Central Asia Summit 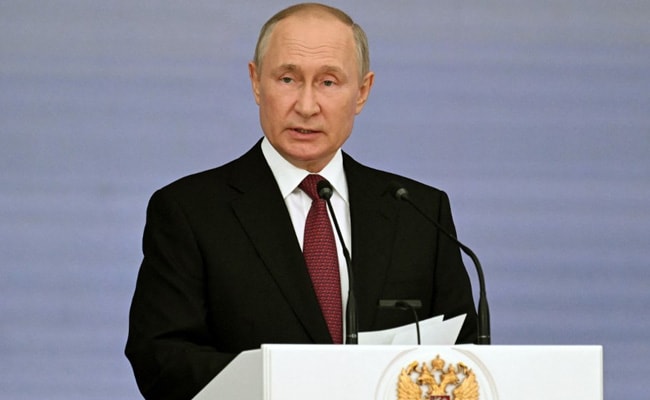 Russian President Vladimir Putin on Friday described India and China as "close allies and partners" and said that the two Asian giants always talked about the need to initiate a dialogue and resolve the Ukraine conflict peacefully, nearly a month after Prime Minister Narendra Modi told him during a summit that today's era is not of war.

Putin made the remarks during a press conference in Kazakhstan's capital Astana, where he was on a visit to attend the first Russia-Central Asia Summit during which the presidents of Russia, Kazakhstan, Kyrgyzstan, Tajikistan, Turkmenistan and Uzbekistan discussed efforts to expand interaction among them in various spheres.

Talking about the potential mediatory role of China and India at negotiations with Ukraine, Putin said that Beijing and New Delhi always talked about the need to build a dialogue and solve the conflict peacefully, state-owned Tass news agency reported.

India has not yet condemned the Russian invasion of Ukraine and it has been maintaining that the crisis must be resolved through diplomacy and dialogue.

In a bilateral meeting with President Putin on the sidelines of the annual summit of the Shanghai Cooperation Organisation (SCO) in Samarkand last month, Prime Minister Modi underlined the importance of "democracy, dialogue and diplomacy" while calling for an early cessation of hostilities in Ukraine.

"I know today's era is not of war. We discussed this issue with you on phone several times, that democracy, diplomacy and dialogue touch the entire world. We will have the opportunity to talk today about how we can move forward on the road of peace in the coming days," Modi said in his first in-person meeting with Putin since the Ukraine conflict began in February.

On the sidelines of the SCO Summit, Putin also met Chinese President Xi Jinping, who raised "questions and concerns" over the Ukraine conflict.

This was perhaps for the first time in over six months of Russia's Ukraine war, China, which remained a steadfast ally of Moscow and declined to condemn the invasion, aired its concerns over Putin's move.

"We highly value the balanced position of our Chinese friends when it comes to the Ukraine crisis. We understand your questions and concerns about this," Putin was quoted as saying by the Hong Kong based South China Morning Post.

Xi and Putin maintained close personal relations in the 10-year tenure of the Chinese leader and Beijing effectively stood by Moscow declining to condemn the Russian invasion of Ukraine, even though it officially asserts that it maintains a neutral stance on the Ukraine issue.

Last month, Putin in a televised address to the nation said that Russia will use all the means at its disposal to protect its territory, warning the West that "this is not a bluff".

Since early September, Ukraine forces have swiftly recaptured large swaths of land in Ukraine's Kharkiv region that Russian troops took over in early weeks of the war which began on February 24.