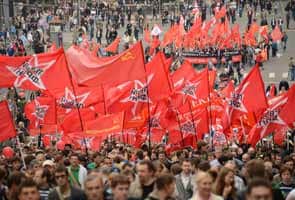 Moscow: Thousands marched through Moscow on Saturday to protest against the rule of Vladimir Putin in a test of the opposition's challenge to the Russian president four months after his inauguration.

The protest was dubbed the "March of Millions" by organisers, who hope to mobilise 50,000 people to show they still have the momentum created by the first demonstrations in December against fraud-tainted elections and Putin's holding the reins of power for more than a decade.

Police said that 5,000 people had already joined the protest but organiser and far-left leader Sergei Udaltsov said that at least 15,000 were involved in the early stages.

Split between liberals, nationalists and the extreme-left, the anti-Putin opposition has been struggling with its own divisions and accusations it lacks any coherent message beyond hostility to the Kremlin.

"Left-wing organisations on the left side of the boulevard!" police shouted through loudspeakers as the march got under way with the different political movements marching in separate files.

This protest, culminating in a rally and speeches in the afternoon, has a bigger focus on social injustice than previous actions and for the first time the Russian Communist Party -- the biggest opposition party in parliament -- is represented.

The march has been given extra impetus by the expulsion from parliament of anti-Putin deputy Gennady Gudkov over alleged conflicting business interests, in what the lawmaker's supporters said was crude revenge for opposing Putin.

It is also the first mass action since the sentencing of three members of punk band Pussy Riot to two years in prison for an anti-Putin protest in an Orthodox cathedral, which has become a rallying cause for many in the opposition.

"The authorities are afraid of the people so they are experimenting with pressure. I think the people are not afraid...", said former prime minister turned Kremlin foe Mikhail Kasyanov, adding that they had taken to the streets to call for "an end to repression.".

Police, who have warned of possible "provocations" at the rally, have said 7,000 members of the security forces are being deployed to ensure order.

There was also a more light-hearted touch with some mocking Mr Putin's recent "birdman" stunt where he flew a hang-glider to guide rare cranes on their winter migration.

One protestor dressed up in a white suit and a helmet of the kind worn by Mr Putin with the slogan "I teach cranes to fly" written on his back.

The head of Russia's consumer and health protection agency Gennady Onishchenko sought to deter people from taking part, warning the protestors of the risks of catching colds and flu.

"Look around you and check you are near no one who is coughing and sneezing," he told would-be marchers.

Billionaire tycoon Mikhail Prokhorov, who came third in the March 4 presidential elections and took part in some previous protests, said he would not be joining the march as the opposition had no coherent programme, said radio station Moscow Echo.

Thousands-strong protests were also expected in major regional centres including the second city of Saint Petersburg and Yekaterinburg in the Urals.

Promoted
Listen to the latest songs, only on JioSaavn.com
A protest in the Far East city of Vladivostok only mustered around a few dozen people, police and organisers said. A protest in the Urals city of Perm gathered 300 people, local news reports said.