Protests over anti-joking law in Brazil 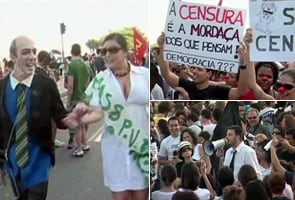 Rio de Janeiro: Thousands of demonstrators marched in Rio de Janeiro on Sunday to protest against a law forbidding Brazilian TV and radio broadcasters from making fun of candidates ahead of the nation's elections.

The first wave of on-air political ads starts on Tuesday in the campaign to elect a replacement for centre-left President Luiz Inacio Lula da Silva.

The "anti-joking law" prohibits ridiculing candidates in the three months before the election on October 3, with a possible second-round runoff on October 31.

The protesters say it is a "draconian relic" of Brazil's dictatorship that threatens free speech and a blight on the reputation of Latin America's largest nation.

Comedian Fabio Porchat, who organised the protest, described the situation as a "bad joke."

"The judge has a strict consideration of the 1997 law that you cannot talk about politics in a comedy show, this is absurd," he added.

But proponents say the restrictions keep candidates from being portrayed unfairly, help ensure a level playing field and encourage candour by candidates.

The law has become a hot, trending topic for Brazilian users of Twitter and the focus of newspaper and magazine columns as well as debates at public seminars.

Making fun of candidates on air ahead of elections is punishable by fines up to 112 thousand US dollars and a broadcast-license suspension.

Only a few fines have ever been handed out.

But comedians say that has been sufficient to cause TV and radio stations to self-censor their material during elections.

The law holds that TV and radio programmes cannot "use trickery, montages or other features of audio or video in any way to degrade or ridicule a candidate, party or coalition."

Because the Internet is not licensed by the government, it is not covered under the law.

But if a TV or radio programme were to ridicule a candidate online, a complaint could be judged by the supreme electoral court.

Without any comic relief in sight, Brazilians are in for weeks of deadpan news coverage of some quirky candidates.

Dilma Rousseff, the governing party candidate who tops all polls, has a lumbering speaking manner and a tough management style that earned her the nickname "Iron Lady."

Despite strong - some would say strained - efforts to be seen like a regular guy, he continues to come off as an awkward, though skilled, technocrat.
Comments
anti-joking lawprotestsRio de JaneiroBrazil