Protesters Clash with Police in Bahrain, At least 2 Wounded: Witnesses 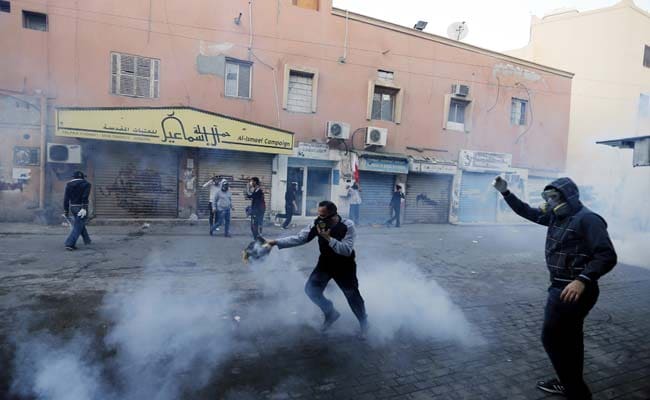 A protester picks up a tear gas canister fired by riot police during clashes in the village of Bilad al-Qadeem, south of Manama January 16, 2015.(Reuters)

Manama: Around 150 protesters clashed with Bahraini security forces in the capital Manama on Friday during demonstrations over the detention of a prominent opposition leader, eyewitnesses said.

Western-allied Bahrain has been wracked by tensions since the authorities put down protests in 2011, with Bahrain's majority Shi'ite Muslims demanding reforms and a bigger say in the running of the Sunni-ruled kingdom.

The discontent has worsened since the arrest on Dec. 28 of Sheikh Ali Salman, a Shi'ite Muslim cleric who heads al-Wefaq Islamic Society, after he led a protest rally against last November's elections, which were boycotted by the opposition.
Witnesses said a demonstration in front of Salman's house turned violent, with security forces firing bird-shot and tear gas at the demonstrators. Young men attacked security forces with iron rods and petrol bombs.

The public prosecutor has accused Salman of several offences, including inciting people to overthrow the government. The prosecutor remanded him in custody on Sunday for 15 days pending further investigation.

The U.S. State Department has criticised Salman's detention, saying it could further stoke tension in Bahrain, which is home to the U.S. Fifth Fleet.
© Thomson Reuters 2015
Comments
BahrainIslamic SocietyManama