Prince Harry 'thrilled to be back, downplays candid comments 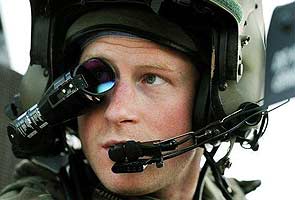 London: Prince Harry, "thrilled" on being back in the UK after a 20-week deployment in war-torn Afghanistan, downplayed his admission of killing the Taliban saying it was a job "you would expect to do" as a soldier.

The 28-year-old Apache co-pilot gunner arrived back yesterday at RAF Brize Norton in Oxfordshire after his tour of duty in Afghanistan.

Harry has been on post-deployment 'decompression' at a British military base in Akrotiri, Cyprus, since leaving Helmand province on Monday night.

In his first comments since returning home, Harry said that killing the Taliban is a job "you would expect to do" as a soldier, the Sky News reported.

"It was a hell of an experience. I'm really proud of the guys. It's very different to when I was last out there. I'm just thrilled to be back," Harry was quoted by the Daily Mail as saying.

The third-in-line to the throne made headlines this week after he confirmed he shot dead insurgents from the cockpit - saying he took the enemy "out of the game". The frank admission from Harry that he had personally killed enemy fighters drew a backlash from anti-war activists, some former soldiers and the Taliban themselves.

In response to his comments, he said: "You get asked to do things that you would expect to do wearing this uniform. That's as simple as that, really."

After 20 weeks away, Harry said he was "very happy to be back" and is "longing" to see his brother and sister-in-law as well as the rest of his family.

"I don't know what normal is anymore and never really have done. There's nothing normal about what we've doing for the last four and a half months," Harry said.

"In the last day that I was there a seven-year-old girl got shot down by insurgents. Normality is a very ambiguous thing. I will continue being myself. I will enjoy being a soldier," he said.

"You get life experiences that you get nowhere else out there," Harry said of his time in the war-torn country. St James's Palace said he left Brize Norton privately, but did not comment on where he was headed.

Promoted
Listen to the latest songs, only on JioSaavn.com
He revealed he does not have any particular plans for the coming year, but he would like to dedicate more time to royal duties and charitable causes.