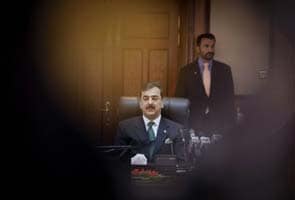 Karachi/Islamabad: The beleaguered PPP-led government in Pakistan was today reduced to a minority after the MQM pulled out of the ruling coalition ostensibly to protest its failure to address the people's problems.

"The Muttahida Qaumi Movement has announced its decision to sit in the opposition benches in the National Assembly and in the Senate," the party said in a statement in Karachi.

"It has been decided. We will sit on the opposition benches in the National Assembly and the Senate," MQM spokesman Wasay Jalil was quoted as saying by Dawn.

The MQM, which had pulled its two ministers out of the federal cabinet last month, announced its decision to quit the nearly three-year-old coalition following meetings of its top leaders in Karachi and London.

The MQM, which has 25 lawmakers in the National Assembly or lower house of parliament, has played a key role in propping up the government.

The PPP, which has 126 lawmakers and is now backed by 31 more parliamentarians, was at least 14 seats short of a simple majority in the 342 member National Assembly.

In Lahore, Gilani insisted that his government was not facing any crisis and would survive despite the withdrawal of support by the MQM.

MQM leaders said their party had decided to pull out of the coalition because the PPP had failed to address problems confronting the people, including a rise in the prices of fuel and other items, growing unemployment, terrorism and an economic downturn.

They claimed the MQM had acted only after giving the PPP adequate time to address these issues.

This was the second major setback for the PPP-led government since December, when the Jamiat Ulema-e-Islam left the coalition after the Prime Minister sacked one of the ministers from the party.

Since then, JUI chief Maulana Fazlur Rehman has called for the resignation of Gilani, saying he had sabotaged the policy of reconciliation adopted by PPP chief and President Asif Ali Zardari.

Senior MQM leader Haider Abbas Rizvi told the media that his party will support all decisions made by the government in the interest of the people despite sitting in the opposition in the National Assembly and the Senate or upper house of parliament.

"The MQM will sit in the opposition and support those decisions of the government which are in the interest of the people. We also retain the right to oppose those decisions which go against the people," said Rizvi, a close confidant of London-based MQM chief Altaf Hussain.

The MQM will make requests for its lawmakers to be allocated places in the opposition benches of the Senate and National Assembly for the parliamentary session beginning tomorrow.

Relations between the MQM and the PPP hit an all-time low last month after PPP leader and Sindh Home Minister Zulfiqar Mirza alleged the MQM was behind a spate of ethnic killings in the financial hub of Karachi.

The PPP did not act on the MQMs demand for action to be taken against Mirza, a close aide of Zardari.

However, MQM leader Rizvi contended this was not the catalyst for his party's decision.

"We presented the people's issues to the Prime Minister and the President, including the price rise, terrorism, the hike in petrol prices on New Year's day, but they were not addressed," he said.

"People are committing suicide and selling their children. They have no jobs and unemployment is rising. When the situation went out of control we exercised the democratic option of leaving the coalition," he added.

Rizvi refused to answer the media's questions on whether the MQM would support Prime Minister Gilani if he was forced to seek a vote of confidence in parliament, saying this was a "hypothetical issue".

He said: "When we come to the bridge, we will see whether we have to cross it or not. Let the bridge come first and then we will decide."

Faisal Sabzwari, another senior MQM leader, said his party will maintain contacts with the MQM and the government.

MQM leaders also warned that their party would soon decide on the issue of continuing as a partner in the PPP-led coalition in Sindh province.

Political observers contended that the MQM, which draws its powers from the Urdu-speaking people of Karachi, was acting at the behest of the military establishment.

They further said the PPP would not have to turn to the PML-N, which has 89 parliamentarians, or a dissident faction of the PML-Q to prop up the federal government.
Comments
PPPMQMYousuf Raza GilaniPPP reduced to minorityPML