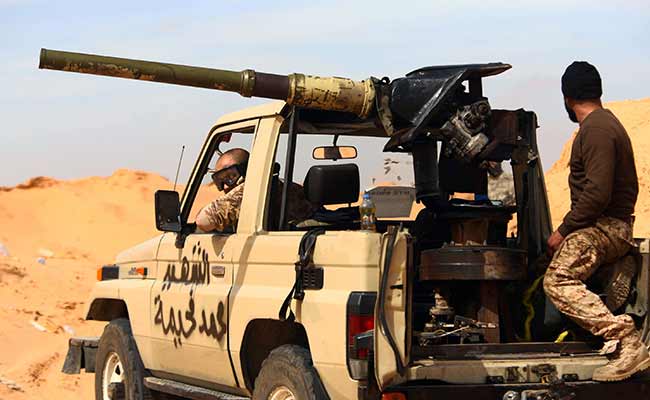 Fighters from the Fajr Libya (Libya Dawn), an alliance of Islamist-backed militias, take position in Bir al-Ghanam, around 50 kilometres from the capital, on March 5, 2015. (AFP Photo)

Rare clashes between jihadists from the Islamic State group and fighters from the Fajr Libya militia coalition erupted on Saturday in the central city of Sirte, security and militia officials said.

It was the first report of fighting between the two groups since February, when Fajr Libya said it had sent reinforcements to Sirte to restore security in the city.

That move came following reports that IS-affiliated jihadists had seized government buildings, the local university and a state radio station.

A local security official in Sirte said Saturday's fighting broke out at midday in the eastern part of Sirte where the jihadists have positions. The official was unable to say what started it.

General Mohammed al-Ajtal, a military commander with Fajr Libya, spoke of "fierce fighting" and told AFP that one of his men had been killed.

Sirte, the hometown of Moamer Kadhafi 450 kilometres (280 miles) east of Tripoli, has been a bastion of Islamist extremism since the 2011 revolt that toppled and killed the dictator.

Libya has been plagued by chaos since Kadhafi's death, with heavily armed militias battling for control of its cities and oil wealth and rival governments and parliaments vying for power.

Last summer the Fajr Libya alliance, which also comprises Islamist militia, overran the capital Tripoli where it installed its own government and parliament, emerging as a key player.

While it has regularly denounced "terrorism", Fajr Libya maintains links with the radical Ansar al-Sharia, which is present in Sirte but does not recognise the Islamic State group's presence in Libya.

Ansar al-Sharia has been classified as a terrorist organisation by the United Nations.

IS has expanded its influence from Syria and Iraq where it has set up a "caliphate" and gained a foothold in Libya, where it has claimed several bombings.

Promoted
Listen to the latest songs, only on JioSaavn.com
Last month a Libyan branch of IS claimed the beheading of 21 Christians, mostly Egyptians, prompting Cairo to launch retaliatory air strikes on jihadist targets in the North African country.

Nufliyeh, a town 120 kilometres east of Sirte, is considered to be the IS stronghold in Libya along with Derna in its far east and which was hit by the Egyptian air strikes in February.