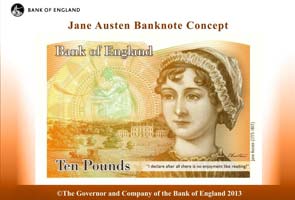 London: British 19th century novelist Jane Austen will become the face of the new 10 pound note, the Bank of England said yesterday, defusing criticism that women are under-represented on the country's currency.

The writer of classics such as "Pride and Prejudice", "Sense and Sensibility" and "Emma" will replace naturalist Charles Darwin on the reverse of Britain's most popular banknote.

Britain's central bank sparked an outcry in April when it announced former prime minister Winston Churchill would replace social reformer Elizabeth Fry on the reverse side of the five pound note, depriving the currency of its only female historical figure.

Mark Carney, the first foreigner to head the bank in its 319-year history, praised Austen as "one of the greatest writers in English literature" and said the choice of future banknote characters would be reviewed to ensure a row of this sort did not erupt again.

"We believe that our notes should celebrate the full diversity of great British historical figures and their contributions in a wide range of fields," he told a gathering at the Jane Austen House Museum in Chawton, the 17th century house where the author wrote some of her best-known novels.

"We want people to have confidence in our commitment to diversity. That is why I am today announcing a review of the selection process for future banknote characters."

The Austen notes are likely to come into circulation in 2017 and will feature a portrait adapted from an original sketch by Jane's sister together with the quote 'I declare after all there is no enjoyment like reading!' from Pride and Prejudice.

Carney, who headed the Bank of Canada before taking the helm of Britain's central bank on July 1, is keen to assert his reformist credentials in an antiquated institution where doormen still dress in top hats and pink tail-coats.

Whether Carney, who has four daughters, will succeed in redressing the gender imbalance on the bank's monetary policy committee remains to be seen. The nine-strong body has been male-only since May 2010, and only four women have served on the committee since its creation in 1997.

In his first public press conference since taking office, Carney made only the slightest reference to monetary policy.

"You can be comforted that our job at the Bank of England is to protect the value of the new Jane Austen note," he said. "In fact, maintaining confidence in our currency is the fundamental responsibility of your central bank."

Like many other countries, Britain changes the design of its banknotes at regular intervals to address counterfeiting risks.

While the sovereign has been depicted on British banknotes since 1960, the vast majority of historical figures - introduced in 1970 - have been men. The pioneering nurse Florence Nightingale appeared on the 10 pound note from the mid-1970s, but the notes went out of issue in the early 1990s.

Carney said it was never the Bank's intention that none of the four characters on its notes should be a woman, but it would invite feedback from the public on whether it could to do more to comply with its commitment to equality. The conclusions of the review will be announced by the end of the year.

Promoted
Listen to the latest songs, only on JioSaavn.com
In Canada, the signature of the central bank governor is carried on bank notes but in Britain that honour goes to the chief cashier.