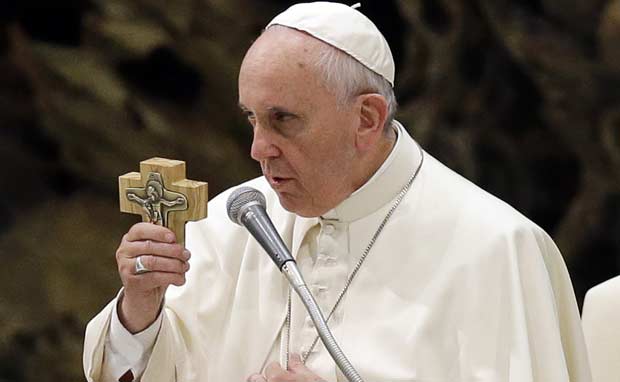 Vatican City: Pope Francis revealed today that he had sacked a church court official who had been caught offering to facilitate marriage annulments for cash.

The shock revelation came in candid remarks to students attending a course at the Roman Rota tribunal, the equivalent of the Supreme Court for canon law, the body of Church rules.

Telling his audience that he wanted decisions on annulments to be easier, quicker and cheaper to obtain for ordinary people, the pontiff made it clear he regards the current system as deeply flawed.

"We have to be very careful that the procedure does not become a kind of business - and I am not talking about something we know nothing about," the 78-year-old pope said.

"There have been public scandals. Some time ago, I had to dismiss from a tribunal someone who was saying 'for 10,000 dollars I will do both the civil and the ecclesiastical procedure'."

Francis did not provide any further details of the episode but a Vatican spokesman told AFP he understood the pontiff to have been referring to an episode which occurred prior to him becoming pope last year.

The conditions under which a marriage can be annulled -- effectively declared to have never existed -- have been a vexed issue for the Church for centuries.

Most notably, the question triggered the 16th Century clash with King Henry VIII that led to the English reformation and the creation of the Church of England.

In recent times, many critics have voiced concern that annulment appears to be more readily available to the wealthy - a view likely to be reinforced by Francis's remarks today.

Calls for the process to be streamlined were discussed at a recent Vatican synod of bishops on the family and Francis said he supported reform on the grounds of "justice and also charity."

Citing his home city of Buenos Aires as an example, he said it was not right that parishioners had to take unpaid days off work and travel up to 240 kilometres (150 miles) to attend church court hearings, and then wait years before getting an answer to requests for annulment.

"The mother Church has enough generosity to provide justice freely, as we have been freely justified by Jesus Christ," he said. "The Church must be able to say, 'Yes, your marriage is void, or 'No, it is valid," he added.

As things stand, most annulment requests are dealt with by lower church courts with the consent of two hearings required for an annulment to be granted.

Promoted
Listen to the latest songs, only on JioSaavn.com
The Roman Rota rules in cases where the two courts disagree or are unable to reach a decision and is charged with ensuring that decision-making on the issue is subject to coherent jurisprudence across the world.

Francis has made a crackdown on corruption within the church one of the dominant themes of his papacy, initiating a shake-up of both the Vatican bureaucracy and its bank in a bid to stem the damage caused by a string of scandals in recent years.