Luigi Ventura, an Italian-born archbishop, was stripped of his diplomatic immunity by the Vatican last July after he was questioned by French police, and resigned in December when he reached the 75-year age limit for his post. 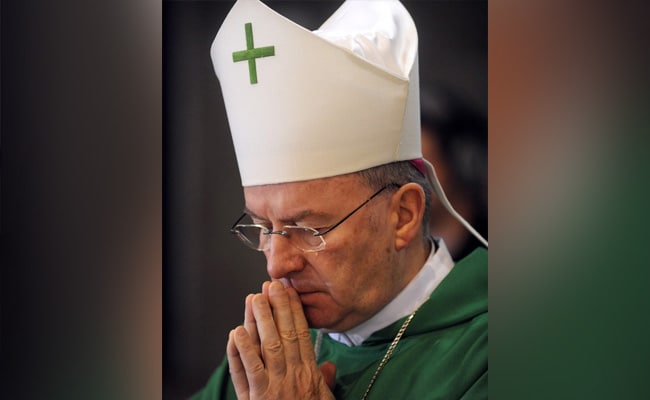 Pope Francis's former ambassador to France, Luigi Ventura, will stand trial for sex assault in Paris in November following complaints by four men, one of whom accused the cleric of inappropriate touching, lawyers said Thursday.

Ventura, an Italian-born archbishop, was stripped of his diplomatic immunity by the Vatican last July after he was questioned by French police, and resigned in December when he reached the 75-year age limit for his post.

His trial will open on November 10, the Paris prosecutor's office said Thursday.

"He will be present," Ventura's lawyer Bertrand Ollivier told AFP. "He will attend the hearing to defend his honour and innocence."

For the alleged victims, the decision to put Ventura on trial was a "victory," said Jade Dousselin, a lawyer for one of the plaintiffs.

The decision "validates what we have been saying all along and reinforces the victims in their decision to press their claims so that his impunity would not be allowed to continue," she said.

An investigation was opened after the Paris municipality alerted prosecutors to a complaint by a young employee that he was repeatedly groped by Ventura, who allegedly caressed his buttocks, at a diplomatic ceremony in January last year.

He was later joined by two other men with similar complaints dating from 2018, and then by a fourth.

A complaint was also filed in Ottawa by a man who made similar allegations about an incident in 2008, while Ventura was serving in Canada.

A career diplomat, Ventura served in Brazil, Bolivia and Britain before being appointed nuncio, or envoy, to Ivory Coast, Burkina Faso and Niger, Chile and then Canada.

The Catholic Church has been battling a wave of allegations detailing decades of sexual assault and abuse by clerics, mostly involving minors.

Pope Francis has vowed to confront criminal offences in the Church's ranks.

A report in June said at least 3,000 children had fallen victim to sex abuse in the French Catholic Church since 1950.

In the most recent high-profile case, defrocked Catholic priest Bernard Preynat was given a five-year jail term in March for sexually abusing boy scouts in his care several decades ago.

But in January, an appeals court overturned the conviction of Preynat's superior, Lyon's former archbishop Philippe Barbarin, for not reporting the abuse despite knowing about it for years.