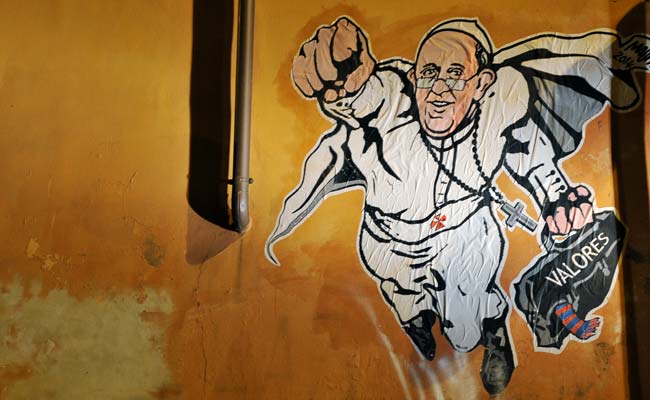 Street art mural of Pope Francis as a superman in downtown Rome near the Vatican on January 28, 2014.

Vatican City: Pope Francis as superman, flying through the air with his white cape billowing out behind him, the image graffitied by an anonymous artist onto a wall in Rome was tweeted by the Vatican today.

Speeding forwards with his fist raised, the heroic pontiff - crucifix swinging in the wind - carries his trademark black bag, with the word "values" written across it, in Spanish, in white letters.

"We share with you graffiti found in a Roman street near the Vatican," the Pontifical Council for Social Communications from the Holy See said on its official Twitter page.

The 77-year-old Argentine pontiff is renowned for throwing off his security and plunging into the crowds to greet pilgrims, and often uses jokes or stories to spread the values of the Church.

The pope is a keen Twitter user himself, regularly posting tweets on his own feeds in nine languages, which boast more than 10 million followers in total.

Pope Francis has become the first pontiff to feature on the cover page of popular rock magazine Rolling Stone.

The title of the page reads "Pope Francis: The Times They Are A-Changin'". According to a Rolling Stone collaborator, the magazine chose the pope as its poster boy because he has been noted as revolutionizing the Vatican City and breaking with tradition.

"After the disastrous papacy of Benedict, a staunch traditionalist who looked like he should be wearing a striped shirt with knife-fingered gloves and menacing teenagers in their nightmares, Francis' basic mastery of skills like smiling in public seemed a small miracle to the average Catholic. But he had far more radical changes in mind," reads the article by Mark Binelli.

Promoted
Listen to the latest songs, only on JioSaavn.com
Pope Francis, the 266th pope of the Catholic Church, was elected to lead the world's 1.2 billion Catholics in March 2013. He was also named Person of the Year by the Time magazine.