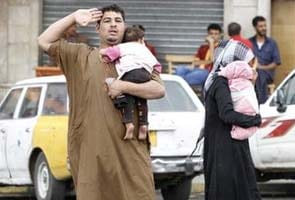 Sanaa/Aden, Yemen: Fleeing the bloodshed and destruction of civil war in Syria, Yosra Mustafa and 15 members of her extended family crossed into Turkey, but found life there too expensive. They tried their luck with Jordan, but were refused entry. Lebanon came to nothing.

Never would they have expected to end up in Yemen, one of the world's poorest countries, itself riven by Islamist insurgency, rebellion by a northern Shi'ite group and separatist unrest in the south.

"There is nowhere else to go to now. We're begging on the streets," said Mustafa, who, dressed in black from head to toe, stationed herself at one of Sanaa's main thoroughfares hoping cars would slow down to pay her a few Yemeni riyals.

Bruno Geddo, UNHCR's representative in Yemen, says the country already hosts 240,000 refugees from Somalia, Ethiopia, Eritrea and Iraq. But the scale of the Syrian conflict, which has virtually laid waste to Mustafa's home town of Aleppo, seems to have prompted people "to run in all directions".

The Syrian civil war, pitting rebel groups against President Bashar al-Assad, has created two million refugees, primarily in the neighbouring countries of Lebanon, Jordan, Turkey and Iraq. With no end in sight after more than two years, those neighbours are increasingly wary conflict could spread to their soil.

Many refugees endure hard camp conditions as prospects of a speedy return home fade, eking out a living as best they can.

But for some desperate Syrians the cost of living even in those tent cities is too high. Yemen, where nearly half of 25 million inhabitants are either hungry or on the edge of hunger, offers a last hope of sanctuary for a growing number.

Mustafa said she and her family paid for their flight to Yemen, where Syrian families do not generally require a visa.

"It's cheaper here. People are kind and honourable," the elderly woman told Reuters, though she acknowledged beggars from other countries like Somalia occasionally harassed them for encroaching on what they consider their territory.

Waheeda, Mustafa's daughter-in-law, was especially bitter as she recounted how 'gangs' had stolen her husband's car which he used as a taxi to make a living in Aleppo's Ashrafiyeh district.

But everywhere her family flees, it seems, they face a new nightmare. In Sanaa, Waheeda said she feared for her daughters' wellbeing, with anecdotes circulating about some Syrians' desperation driving them to offer girls for marriage at a fraction of what a Yemeni bride's dowry would traditionally be.

"When you're people living in the shadows, inevitably things may go wrong," said UNHCR representative Geddo. "We've heard about some young Syrian women being married off cheaply and children are not going to school."

UNHCR says there are about 900 registered Syrian refugees in Yemen, the bulk of whom have arrived this year, and settled in the capital Sanaa, followed by the southern hub of Aden.

Geddo says there may be as many as 1,600 unregistered refugees, according to a rough estimate compiled by an international non-governmental organisation.

"There is a fear of insecurity. When people are traumatised they may well fear that if the government found out that they went to another country they may be persecuted," he said.

The agency can provide identification letters, blankets, kitchen utensils and cash assistance for the most vulnerable, as well as help admitting their children to schools in Yemen.

"They do not need to fear being returned to Syria. Yemen is a very generous host country and they will be granted asylum until they need it ... We have to make it clear they have nothing to lose and only to gain by coming forward."

Legal or illegal, Syrian refugees settle into the everyday life that is the lot of compatriots throughout the region; the search for a roof, food, education for their children.

In a main road in the port city of Aden, 12-year-old Zeina and her 13-year-old brother Saad, stood in stifling heat begging for money to pay rent on the room where their family is staying. The slogan "Free Syria" was spray-painted on a nearby wall.

After spending hours in the sun, the siblings returned to the al-Ameen hotel, temporarily home to several Syrian families.

As Zeina removed her headscarf and brushed back her hair, a stark tan line showed around her face, burnt from hours standing in the sun.

The hotel's bare rooms are fitted with a single fluorescent lamp, two mattresses in the corner, a few gerrycans of water and some metal utensils for cooking.

Escaping from Deraa, the cradle of the uprising in Syria that began 2-1/2 years ago, some families said they could not afford Jordan's expenses. A Jordanian benefactor paid for their trip to Yemen and they ended up in Aden.

The families carve out a living begging and making and selling prayer beads.

Across the hall, men gather to watch more scenes of fighting in Syria on Arab news channels while smoking cigarettes.

For many of them, the only way to return is if Assad leaves.

A deal to get rid of his chemical weapons arsenal now being negotiated through the United States and Russia might, for them, only deflect events from this end and strengthen his position.

Promoted
Listen to the latest songs, only on JioSaavn.com
"If they remove the chemical weapons, but he stays on as president, the problem hasn't been solved," said refugee Abu Mofeed.

With or without the threat of chemical weapons, the conflict looks likely to draw on, sending thousands more refugees like Mustafa to Turkey, then Jordan, to Lebanon, to Yemen. What country, Yosra Mustafa must ask herself, lies beyond Yemen?
© Thomson Reuters 2013