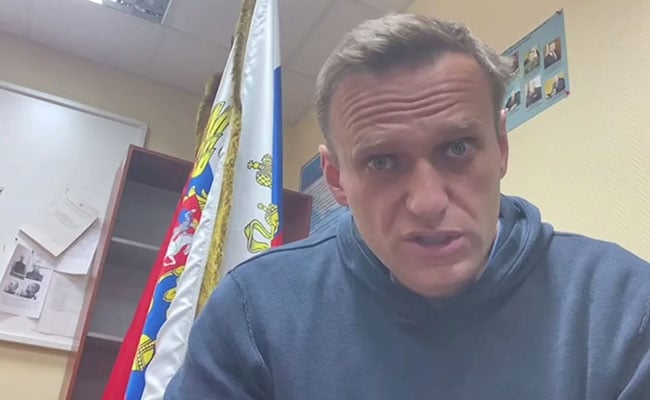 Searches were carried out at the homes of several other Navalny allies. (File)

Russian authorities on Wednesday ramped up pressure on the opposition, searching the apartments and offices of jailed Kremlin critic Alexei Navalny ahead of new protests called for the weekend to demand his release.

Russia's Interior Ministry said Wednesday it had launched a criminal probe into the violation of sanitary and epidemiological measures during a Moscow protest that saw thousands rally in support of Navalny on Saturday.

The ministry's spokeswoman Irina Volk said the organisers and participants of the rally "created a threat of the spread of the novel coronavirus infection".

Zhdanov said on Twitter that Navalny's wife Yulia was at one of the apartments and posted a video from inside where loud hammering could be heard outside the door.

"They are not letting in my lawyer. They broke my door in," Yulia Navalnaya yelled to journalists from out of her apartment window, an AFP journalist reported.

Standing outside the apartment, her lawyer Veronika Polyakova told AFP that the police are not letting her in which is a "violation of the law".

Searches were carried out at the homes of several other Navalny allies, Zhdanov added.

Zhdanov posted a screenshot from a security camera at the office of FBK, showing several masked men there.

The foundation is best known for its investigations into the wealth of Russia's political elite.

Its most recent report suggested President Vladimir Putin was given an opulent property on the Black Sea Coast costing over $1.5 billion as a gift.

The investigation was released days after Navalny was arrested on his return on January 17 from Germany, where he spent months recovering from a nerve agent poisoning he blames on the Kremlin.

Tens of thousands of people demonstrated in cities across Russia on Saturday calling for Navalny's release.

According to independent monitors, more than 3,900 people were detained at the demonstrations while authorities launched a series of criminal probes over the protests.

The Investigative Committee, which probes major crimes, said on Wednesday that 21 criminal cases have been launched across the country over calls to mass unrest, violence against the police and calls for minors to join last Saturday's protests.

Authorities also upped pressure on online platforms for failing to delete posts calling for minors to join the unsanctioned rallies.

Protests in Russia are banned if they are not approved by the authorities, as are calls for people under 18 to join demonstrations.

Also on Wednesday, Russian President Vladimir Putin warned of the growing influence of large technology companies, which he said are "competing" with states.

Navalny's arrest was met with widespread condemnation in the West, with the Group of Seven countries on Tuesday issuing a joint statement which calls for the "immediate and unconditional" release of Navalny.

Russia's Foreign Ministry on Wednesday called the statement "gross interference" in the country's domestic affairs and an "openly unfriendly step".