Employees in the Pentagon building were ordered to shelter in place for more than an hour after gunfire erupted in the bus and subway station just yards from the entrance. 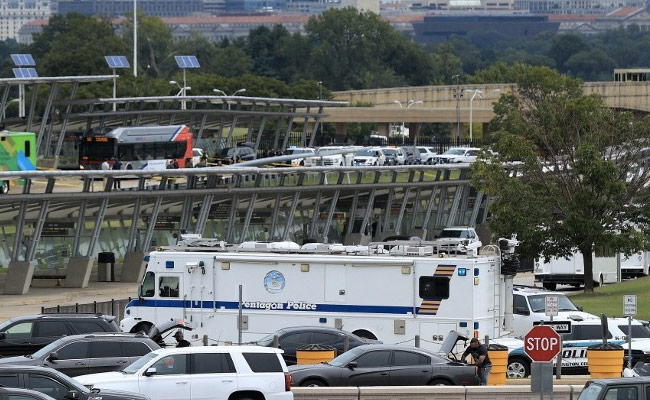 Pentagon gunfire incident: Officials said the site was secure 90 minutes after the incident.

A police officer was killed at the Pentagon's mass transit terminal Tuesday in an incident that forced the lockdown of the US military headquarters, the Defense Department said.

Employees in the Pentagon building in Arlington, a suburb of Washington, were ordered to shelter in place for more than an hour after gunfire erupted in the bus and subway station just yards (meters) from the entrance.

Officials said the site was secure 90 minutes after the incident but declined to explain what happened.

"The incident is over, the scene is secure, and most importantly there's no continuing threat to our community," said Woodrow Kusse, chief of the Pentagon Force Protection Agency, which patrols the iconic five-sided building.

Kusse said there were "several injuries" but would not provide details or confirm reports that the officer was stabbed and died from his injuries, and that the attacker was shot dead.

"This fallen officer died in the line of duty, helping protect the tens of thousands of people who work in -- and who visit -- the Pentagon on a daily basis," Secretary of Defense Lloyd Austin said in a statement.

"He and his fellow officers are members of the Pentagon family, and known to us all as professional, skilled and brave."

Austin said the investigation into the incident is continuing and said it should "proceed unimpeded and without speculation."

Subway services were temporarily suspended and buses headed to the station were diverted to other stops.

Scores of police gathered outside the George Washington University Hospital in Washington where the officer was taken.

"The Pentagon currently is on lockdown due to an incident at the Pentagon Transit Center. We are asking the public to please avoid the area," the Pentagon's security force  tweeted after the incident took place at about 10:37 am (1437 GMT).

Pentagon spokesman John Kirby said Austin was out of the building at the time, in a meeting with President Joe Biden.