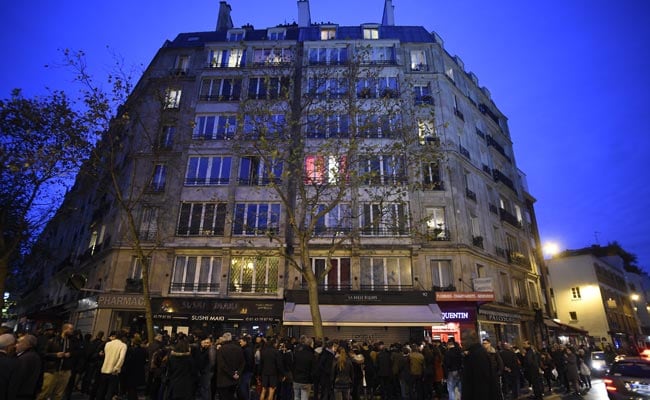 People gather to pay tribute to attack victims at the "Belle Equipe" restaurant, the site of one of the attacks in Paris on November 14, 2015. (Agence France-Presse)

Paris: French police today detained relatives and friends of one of the seven gunmen and suicide bombers who killed at least 129 people in a wave of attacks in Paris claimed by the Islamic State group, as the investigation widened.

The first attacker to be named was 29-year-old Omar Ismail Mostefai, who was identified from a severed finger among the carnage at the Bataclan concert hall, the scene of the worst of the bloodshed with 89 killed.

French police also found a black Seat car that witnesses said was used in shootings at a bar and restaurant by one group of the attackers.

The vehicle was recovered from Montreuil, in the eastern Paris suburbs and was being scoured for evidence.

The capital was strikingly quiet again on Sunday as residents struggled to come to terms with the latest shock, 10 months after jihadists hit satirical magazine Charlie Hebdo and a Jewish supermarket.

On the first of three days of national mourning, traditional open-air markets were cancelled under stringent security procedures and many people stayed at home.

IS jihadists have said they carried out the attacks that left a trail of destruction at the packed Bataclan venue, restaurants and bars, and outside the Stade de France national stadium.

President Francois Hollande called the coordinated assault on Friday night an "act of war" and vowed to hit back "without mercy".

Prosecutors have said the attackers were working in three teams.

The investigation stretches across Europe. Belgian police have arrested several suspects in Brussels, while German authorities are probing a possible link to a man recently found with a car full of explosive devices.

The discovery of a Syrian passport near the body of one attacker has raised fears that some of the assailants might have entered Europe as part of the huge influx of people fleeing Syria's civil war.

Greek authorities have confirmed that the passport belonged to a man who registered as a refugee on the island of Leros in October and they are checking the fingerprints of a second man.

The attacks included the first ever suicide bombings on French soil. Unlike those in January against Charlie Hebdo, none of the assailants had ever been jailed for terror offences.

Mostefai, born in the modest Paris suburb of Courcouronnes as one of four brothers and two sisters, had eight convictions for petty crimes but had never served a prison sentence.

"It's a crazy thing, it's madness. Yesterday I was in Paris and I saw what a mess this was," one of his brothers told AFP before he was taken into custody on Saturday night.

Prints found on a finger in the Bataclan matched those of Mostefai in police files.

Paris prosecutor Francois Molins said he was labelled as radicalised by authorities in 2010 but had "never been implicated in a terrorist network or plot".

In a statement posted online Saturday, IS claimed responsibility for the attacks which it said were revenge for French air strikes in Syria.

The group, which has sown mayhem in large swathes of Syria and Iraq, threatened further attacks in France "as long as it continues its Crusader campaign."

A total of 89 people were killed at the Bataclan concert hall by the armed men who burst in shouting "Allahu akbar" (God is greatest) before gunning down concert-goers watching Californian band Eagles of Death Metal.

They are believed to have executed hostages one by one.

Video shows terrified people scrambling out of a door.

As armed police stormed the venue, two of the gunmen blew themselves up, while the third was shot by police.

A former intelligence chief, speaking to AFP, said it was "very likely" the sophisticated suicide belts had been manufactured in Europe, perhaps even in France.

"The more you carry this stuff around, the more you multiply the risks. It is very likely that there is here, in France or in Europe, one or several guys who have come back from the lands of jihad where they learned the job," he said on condition of anonymity.

Three suicide bombers also detonated their explosives outside the Stade de France stadium where France were playing Germany in a football friendly attended by Hollande.

Several restaurants were targeted, including a popular Cambodian eatery in the trendy Canal St. Martin area, where at least 12 people died. Another 19 people were killed at a busy restaurant on nearby Rue de Charonne.

The seventh attacker blew himself up on a bustling avenue near the concert hall, injuring one other person.

Analysts at Eurasia Group said the attacks "confirm a structural shift in the modus operandi of the Islamic State, and represent a prelude to additional attacks in the West."

The scale of the loss of life sent shockwaves around the world.

London's Tower Bridge, Berlin's Brandenburg Gate and the World Trade Center in New York were among the many landmarks lit up in the red, white and blue of the French national flag in a show of solidarity.

US President Barack Obama described the onslaught as "an attack on all of humanity" and Pope Francis said he was "shaken" by the "inhuman" attacks.

The investigation into the attack spread to Belgium on Saturday where police arrested several suspects in Brussels, including one who was said to have been in Paris at the time of the carnage.

The arrests -- local media said three people were detained -- were in connection with a vehicle found near the Bataclan, they said.

In Germany, the authorities said they were looking into a possible link between the attacks and the arrest in the southern region of Bavaria last week of a man with a car-load of weapons and explosives.