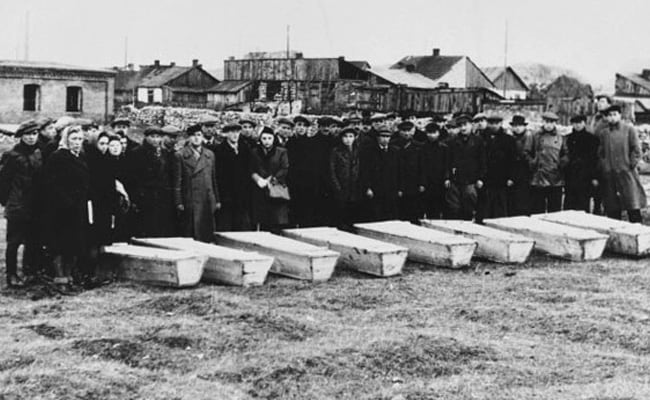 Jews made up a quarter of Kielce's 80,000 residents, only about 500 of whom are estimated by historians to have survived the Holocaust.

Kielce: Seventy years after dozens of Polish Holocaust survivors were bludgeoned to death in the Kielce Pogrom, psychologist Bogdan Bialek is intent on reconciling Poles and Jews.

For years, the 61-year-old Catholic has organised annual memorial marches in Kielce, a city of 200,000 people 150 kilometres (93 miles) south of the capital Warsaw.

"Even if I were alone, I would walk to remember the dead. A man on his own, that's already a huge crowd, it's an entire city," Bialek told news agency AFP ahead of a weekend march.

On July 4, 1946, Kielce erupted in a frenzy of hatred after a rumour was spread that a Jewish family had held a Christian boy in a cellar overnight.

Before the war, Jews made up a quarter of Kielce's 80,000 residents, only about 500 of whom are estimated by historians to have survived the Holocaust.

But a year after the war ended, the town was whipped up into a new anti-Semitic frenzy, fuelled by tales of Jews needing to have blood transfusions from Christian children to survive, or using Christians' blood to make matzos (unleavened Jewish bread).

Communist police, soldiers and workers from a nearby steelworks raided a house on 7/9 Planty Street sheltering Holocaust survivors, including some from the infamous Auschwitz-Birkenau Nazi German death camp.

At least 42 Jews were killed and over 40 injured in the worst anti-Semitic attack in postwar Poland, according to the Washington-based United States Holocaust Memorial Museum.

The pogrom went down as one of the darkest moments in the thousand-year-long history of Polish Jews.

A formal Polish enquiry put the Jewish death toll at 37, with other victims including three non-Jewish Poles and two people killed during a robbery.

After the pogrom, tens of thousands of Jews left the country for good.

Nine people were sentenced to death for their role in the killings, but the Communist authorities of the time tried to blame regime opponents for the crime.

In time, a leaden silence came to shroud the case, with the Communist regime preferring to keep it under wraps.

"When I arrived in Kielce in 1978, I was surprised by the silence; nobody wanted to talk about it," Bialek said.

When communism fell in 1989, locals in Kielce held a memorial for the victims of the pogrom.

But for Bialek it was too little and too official.

"There were many ceremonies, but they were attended by politicians or municipal leaders. That didn't suit me as we had to follow the heart, not the head," he said.

In 2000, he and a friend decided to organise the first March of Memory and Prayer.

On her first visit to Kielce in a half-century in 2004, Marek Edelman, then the last surviving leader of the Warsaw Ghetto Uprising, found it to be "a completely different city."

Several years ago, the son of one of the workers who took part in the pogrom attended the remembrance ceremony, where he delivered a short heart-rending speech and hugged one of the survivors.

Years later, the massacre is still a favourite of conspiracy theorists, with the far right refusing to accept that Poles were responsible.

"I would remove this, it's a lie," a man in his forties tells Bialek, pointing at a plaque commemorating "anti-Semitic unrest" on the white facade of the building at 7/9 Planty Street.

"Poles didn't do this, it was provocation by the Communists to show that Poles are anti-Semitic," he said.

Although not everyone in Kielce approves of Bialek's commemorative drive, his message of tolerance appears to be getting through to young people, more than 2,000 of whom have taken part in workshops organised by his foundation.

Bialek points to several hopeful signs: the city is devoid of anti-Semitic graffiti, has a low incidence of racist crimes and local football fans do not engage in racist chants.

(This story has not been edited by NDTV staff and is auto-generated from a syndicated feed.)
Comments
HolocaustHolocaust RemembranceHolocaust in Poland