Polar vortex: All across the Midwest this week, preparations were underway in neighborhoods, on farms and in homeless shelters for a bone-deep, relentless chill 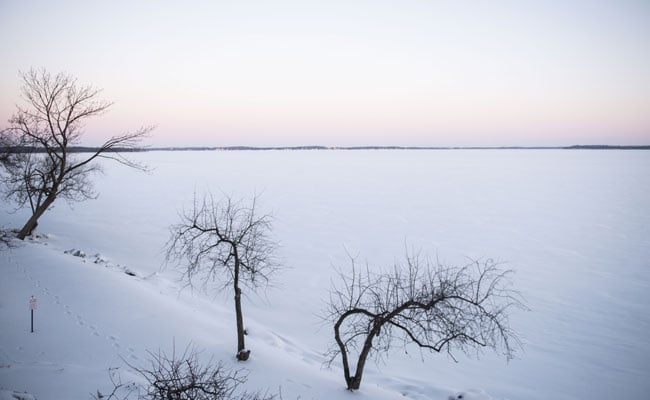 Polar vortex: The extreme cold already has been blamed for one death in Minnesota

For the first half of Officer Kraig Kalka's shift, the temperature outside hovered at about zero. Within hours, he knew, the air would dive toward negative double digits, part of a dangerous 48-hour deep freeze across much of the Midwest.

Wisconsin knows winter, and winter around here is usually cold, blustery and snow-filled. But Tuesday, Kalka patrolled through Wisconsin's capital city with a sharp deadline - the real cold was set to roll in when the day grew dark - and he had lives to save.

"This is historic cold," Kalka said as he drove between homeless shelters, arranging transportation for those stuck on the streets and collecting blankets and hand warmers to dole out downtown for some of Madison's most vulnerable residents. "What we're going to see, I don't remember ever seeing something like that before."

All across the Midwest this week, preparations were underway in neighborhoods, on farms and in homeless shelters for a bone-deep, relentless chill expected through Thursday. Nearly 90 million people are likely to experience temperatures at or below zero in the Midwest and New England, according to the National Weather Service; 25 million of them will face temperatures below minus-20 - dips that when combined with wind can cause frostbite in a matter of minutes.

Polar vortex: Wind chill estimates plummeted to minus-50 in the Dakotas and northern Minnesota on Tuesday morning

The extreme cold already has been blamed for one death in Minnesota, and it has caused statewide declarations of emergency, school closures, Postal Service interruptions and 1,000 airline flight cancellations across the country.

Wind chill estimates plummeted to minus-50 in the Dakotas and northern Minnesota on Tuesday morning, and that same, painfully frigid air is forecast to spread southeast into Minneapolis, Milwaukee, Chicago and Detroit. Winds will make it feel like temperatures of minus-30 to minus-40 as far south as Illinois and northern Indian; it is forecast to feel as low as minus-65 across the northern Great Lakes region.

The Arctic cold is all but certain to break records. Chicago's low temperature Thursday morning is forecast to be close to its lowest ever, the minus-27 recorded on Jan. 20, 1985. One forecast model - the European - predicts that Chicago will hit minus-29 this week.

Some in the northern Midwest went about their days, shopping at local businesses, walking their dogs, biking through snow-covered streets and cross-country skiing. But even the hardiest of towns had to push people indoors: Fargo, North Dakota, canceled part of its annual Winter Frostival, as did organizers of a similar winter carnival in the Twin Cities. And classes at the University of Minnesota and the University of Wisconsin were suspended. 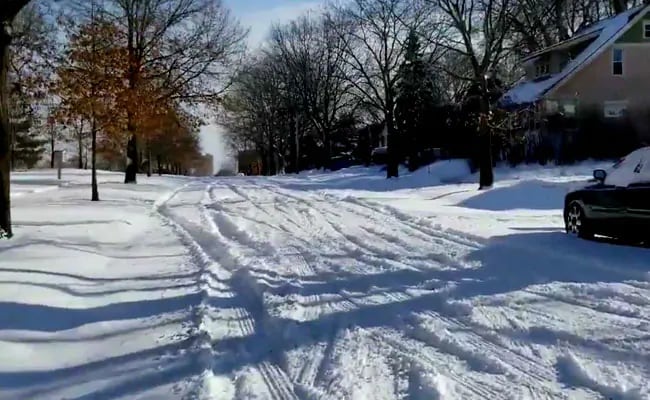 Polar vortex: The Arctic cold is all but certain to break records

"I call it 'The Day After Tomorrow'-type cold," said Katrina Portis, 38, as she trekked through a snow-topped sidewalk in North Minneapolis on Tuesday morning. "We are officially there."

To save money on transportation, Portis walks about 15 minutes from her home to her job as a patient care assistant. She braved the frigid chill with a fur coat, pink hat, two layers of gloves and leggings under her jeans. As a Chicago native, she thought she was used to the cold; a year in Minnesota has reset her thermostat.

But Wednesday's anticipated minus-40 might be her breaking point: "Tomorrow I told them I'm not coming in," Portis said.

Then there are Minnesotans such as Kyle Pribyl, a 26-year-old medical student at the University of Minnesota. Waiting for the light rail to cross an intersection on the Minneapolis campus, Pribyl wore only a Minnesota Wild hooded sweatshirt - and gym shorts.

"Honestly, it's not that bad. It's only like 8 below?" Pribyl said. Wind chill estimates had it about 32 degrees below zero. Pribyl shrugged. It was just a five-minute walk to the recreation center.

"When you've lived here your whole life, I guess you kind of just get used to the cold weather," Pribyl said. "This is who I am."

The temperatures likewise couldn't keep away avid ice fishermen at Arnesen's Rocky Point Resort on Lake of the Woods, at the northern tip of Minnesota.

"These people, they schedule it six months to a year out and they want to go fishing," manager Paul Arnesen said. "We're equipped for it. We're prepared." 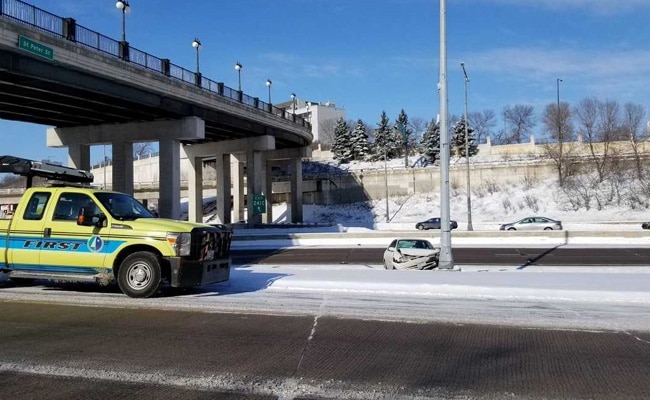 Denizens of the far northern Minnesota town of Thief River Falls also were undeterred by the rapidly declining temperatures. After all, they live about an hour south of the Canadian border.

"It's just a cold snap," said Mayor Brian Holmer, who owns Michael's Meats, a local market. "Right now I look out and there's cars driving up and down the streets, people are still coming and doing their normal thing. Everybody's gotta eat, especially in the winter time."

The temperature at the Thief River Falls airport registered minus-25 at sunrise Tuesday, with northwesterly winds at 25 mph - a calculated wind chill of minus-58. Many schools in the region closed, fearful that the temperatures were too dangerous for children to be outside at bus stops.

Jason Brumwell, a bus driver for the Red Lake Falls School District, explained that severe cold makes diesel fuel gel up, which can clog vehicles' fuel filters and lead to breakdowns. If a bus falters on a rural part of his route, the wait for help to arrive can be lengthy.

School closures across the Midwest prompted many families to seek daytime child care, which some, like Tarrah Garcia, found daunting. Garcia had to attend a mandatory, all-staff meeting at the homeowner's management company where she works, but her daughter's school was closed. Garcia struggled to find someone who could watch 7-year-old Gypsy.

At 11:30 p.m. Monday night, she saw on Facebook that a nearby YMCA enrichment center would be opening early to accommodate children who were missing school - a savior.

Garcia's family moved back to Minnesota from Florida two years ago, but Garcia had spent enough time in the north to know the drill on subzero days like Tuesday: "It gets to a point where if it's below zero, it's just below zero," she said.

Emergency day shelters for families and children also were open in Madison, and those seeking reprieve from the cold sipped coffee and shared warm meals as they waited for even colder weather to descend. Shuttle buses had been arranged to transport women and children between various day and night shelters so they wouldn't have to venture outside for more than a few seconds.

But single men such as Floyd White, a 64-year-old Army veteran, were concerned that the historic cold would endanger those like him, who had to register for the overnight shelter in one building and then walk to satellite sleeping quarters up to five blocks away on dark, frozen sidewalks.

"I'm going to look into this," Kalka told White and several others, encouraging them to stay inside as the officer tried to find a way to keep the men safe.

As the sun set and Kalka's shift came to an end, he was confident that most of the city's homeless population had found warmth and safety. But he worried about the few who are known to avoid overnight shelters, who because of trauma or social anxiety preferred to sleep outside - even in deep freezes.

For them, Kalka was prepared to offer tarps, blankets and hand warmers - and the same farewell he extended to everyone he encountered Tuesday: "Stay warm."