"As A Mother Myself...": US Mayor Apologises Over Violent Arrest Video

Cellphone video showed a Phoenix officer drawing his weapon and shouting profanities after a father, mother and two young daughters left the Family Dollar store on May 27 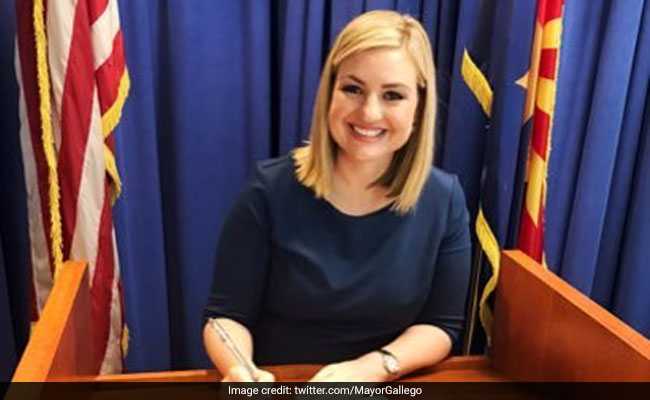 Officers confronted the family in the parking lot of a nearby apartment complex.

The mayor of Phoenix apologized and called a community meeting for this week amid public anger over a viral video showing police pointing a gun at the parents of a 4-year-old child over allegations she shoplifted a doll.

Cellphone video showed a Phoenix officer drawing his weapon and shouting profanities after a father, mother and two young daughters left the Family Dollar store on May 27. The parents were unaware one of their girls took a doll without paying for it, according to the family. Police said they were tipped off to the theft by employees.

Officers confronted the family in the parking lot of a nearby apartment complex, with at least one pulling his gun, cursing at the adults and yelling at them to put up their hands, while threatening to shoot them if they failed to comply, according to the cellphone video.

Mayor Kate Gallego wrote on Twitter late on Saturday that the incident, which sparked anger on social media, made her feel "sick." She apologized to the family and noted that the city would speed up the rollout of body-worn cameras so that every police precinct has them by August.

"There is no situation in which this behavior is ever close to acceptable," Gallego said on Twitter. "As a mother myself, seeing these children placed in such a terrifying situation is beyond upsetting."

The footage, filmed by a bystander, shows 24-year-old Iesha Harper getting out of a car with her two daughters, London Drake, 1, and Island Drake, 4, holding one of the girls in her arms. She is then shouted at by another officer as a third puts her 22-year-old fiance, Dravon Ames, in handcuffs.

In a letter to the city last week, he said the family was willing to settle the case for $10 million.

Police have launched an internal investigation. They said the officers involved had been assigned to desk duty.

The mayor called a community meeting for 6 p.m. on Tuesday and said Police Chief Jeri Williams would be there.

"I recognize that to get to the bottom of this issue and implement meaningful change, we are going to have some uncomfortable and painful conversations," the mayor tweeted.

Williams said in a Facebook post that she was "disturbed by the language and the actions" of the officers.

"As soon as I was aware of the video, I began an immediate internal investigation," Williams said. "I assure you that this incident is not representative of the majority of Phoenix police officers who serve this city."

(Except for the headline, this story has not been edited by NDTV staff and is published from a syndicated feed.)
Comments
Phoenix Viral VideoPhoenix Alleged Child ShoplifterPhoenix Mayor Kate Gallego